Mexico’s Gun Supply and the 90 Percent Myth is republished with permission of STRATFOR.

In addition to watching tactical developments of the cartel wars on the ground and studying the dynamics of the conflict among the various warring factions, we have also been paying close attention to the ways that both the Mexican and U.S. governments have reacted to these developments. Perhaps one of the most interesting aspects to watch has been the way in which the Mexican government has tried to deflect responsibility for the cartel wars away from itself and onto the United States. According to the Mexican government, the cartel wars are not a result of corruption in Mexico or of economic and societal dynamics that leave many Mexicans marginalized and desperate to find a way to make a living. Instead, the cartel wars are due to the insatiable American appetite for narcotics and the endless stream of guns that flows from the United States into Mexico and that results in Mexican violence.

Interestingly, the part of this argument pertaining to guns has been adopted by many politicians and government officials in the United States in recent years. It has now become quite common to hear U.S. officials confidently assert that 90 percent of the weapons used by the Mexican drug cartels come from the United States. However, a close examination of the dynamics of the cartel wars in Mexico — and of how the oft-echoed 90 percent number was reached — clearly demonstrates that the number is more political rhetoric than empirical fact.

As we discussed in a previous analysis, the 90 percent number was derived from a June 2009 U.S. Government Accountability Office (GAO) report to Congress on U.S. efforts to combat arms trafficking to Mexico (see external link).

The remaining 22,800 firearms seized by Mexican authorities in 2008 were not traced for a variety of reasons. In addition to factors such as bureaucratic barriers and negligence, many of the weapons seized by Mexican authorities either do not bear serial numbers or have had their serial numbers altered or obliterated. It is also important to understand that the Mexican authorities simply don’t bother to submit some classes of weapons to the ATF for tracing. Such weapons include firearms they identify as coming from their own military or police forces, or guns that they can trace back themselves as being sold through the Mexican Defense Department’s Arms and Ammunition Marketing Division (UCAM). Likewise, they do not ask ATF to trace military ordnance from third countries like the South Korean fragmentation grenades commonly used in cartel attacks.

Of course, some or even many of the 22,800 firearms the Mexicans did not submit to ATF for tracing may have originated in the United States. But according to the figures presented by the GAO, there is no evidence to support the assertion that 90 percent of the guns used by the Mexican cartels come from the United States — especially when not even 50 percent of those that were submitted for tracing were ultimately found to be of U.S. origin.

This point leads us to consider the types of weapons being used by the Mexican cartels and where they come from. 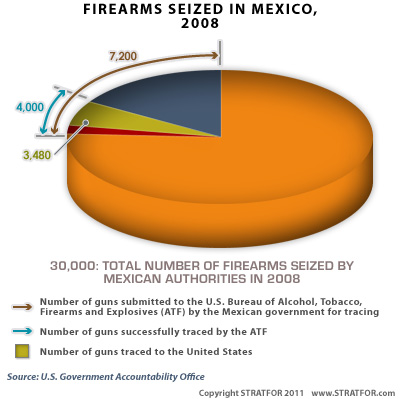 Types and Sources of Guns

To gain an understanding of the dynamics of the gun flow inside Mexico, it helps if one divides the guns seized by Mexican authorities from criminals into three broad categories — which, incidentally, just happen to represent three different sources.

The first category of weapons encountered in Mexico is weapons available legally for sale in Mexico through UCAM. These include handguns smaller than a .357 magnum such as .380 and .38 Special.

A large portion of this first type of guns used by criminals is purchased in Mexico, or stolen from their legitimate owners. While UCAM does have very strict regulations for civilians to purchase guns, criminals will use straw purchasers to obtain firearms from UCAM or obtain them from corrupt officials. Cartel hit men in Mexico commonly use .380 pistols equipped with sound suppressors in their assassinations. In many cases, these pistols are purchased in Mexico, the suppressors are locally manufactured and the guns are adapted to receive the suppressors by Mexican gunsmiths.

Additionally, most of the explosives the cartels have been using in improvised explosive devices (IEDs) in Mexico over the past year have used commercially available Tovex, so we consider these explosives to fall in this first category. Mexican IEDs are another area where the rhetoric has been interesting to analyze, but we will explore this topic another time.

Type 2: Guns Legally Available in the U.S. but Not in Mexico

Many popular handgun calibers, such as 9 mm, .45 and .40, are reserved for the military and police and are not available for sale to civilians in Mexico. These guns, which are legally sold and very popular in the United States, comprise our second category, which also includes .50-caliber rifles, semiautomatic versions of assault rifles like the AK-47 and M16 and the FN Five-Seven pistol.

When we consider this second type of guns, a large number of them encountered in Mexico are likely purchased in the United States. Indeed, the GAO report notes that many of the guns most commonly traced back to the United States fall into this category. There are also many .45-caliber and 9 mm semiautomatic pistols and .357 revolvers obtained from deserters from the Mexican military and police, purchased from corrupt Mexican authorities or even brought in from South America (guns made by manufacturers such as Taurus and Bersa). This category also includes semiautomatic variants of assault rifles and main battle rifles, which are often converted by Mexican gunsmiths to be capable of fully automatic fire.

One can buy these types of weapons on the international arms market, but one pays a premium for such guns and it is cheaper and easier to simply buy them in the United States or South America and smuggle them into Mexico. In fact, there is an entire cottage industry that has developed to smuggle such weapons, and not all the customers are cartel hit men. There are many Mexican citizens who own guns in calibers such as .45, 9 mm, .40 and .44 magnum for self-defense — even though such guns are illegal in Mexico.

Type 3: Guns Not Available for Civilian Purchase in Mexico or the U.S.

This third type of weapon is fairly difficult and very expensive to obtain in the United States (especially in the large numbers in which the cartels are employing them). They are also dangerous to obtain in the United States due to heavy law-enforcement scrutiny. Therefore, most of the military ordnance used by the Mexican cartels comes from other sources, such as the international arms market (increasingly from China via the same networks that furnish precursor chemicals for narcotics manufacturing), or from corrupt elements in the Mexican military or even deserters who take their weapons with them. Besides, items such as South Korean fragmentation grenades and RPG-7s, often used by the cartels, simply are not in the U.S. arsenal. This means that very few of the weapons in this category come from the United States.

In recent years the cartels (especially their enforcer groups such as Los Zetas, Gente Nueva and La Linea) have been increasingly using military weaponry instead of sporting arms. A close examination of the arms seized from the enforcer groups and their training camps clearly demonstrates this trend toward military ordnance, including many weapons not readily available in the United States. Some of these seizures have included M60 machine guns and hundreds of 40 mm grenades obtained from the military arsenals of countries like Guatemala.

But Guatemala is not the only source of such weapons. Latin America is awash in weapons that were shipped there over the past several decades to supply the various insurgencies and counterinsurgencies in the region. When these military-grade weapons are combined with the rampant corruption in the region, they quickly find their way into the black arms market. The Mexican cartels have supply-chain contacts that help move narcotics to Mexico from South America and they are able to use this same network to obtain guns from the black market in South and Central America and then smuggle them into Mexico. While there are many weapons in this category that were manufactured in the United States, the overwhelming majority of the U.S.-manufactured weapons of this third type encountered in Mexico — like LAW rockets and M60 machine guns — come into Mexico from third countries and not directly from the United States.

There are also some cases of overlap between classes of weapons. For example, the FN Five-Seven pistol is available for commercial purchase in the United States, but the 5.7×28 armor-piercing ammunition for the pistol favored by the cartels is not — it is a restricted item. However, some of the special operations forces units in the Mexican military are issued the Five-Seven as well as the FN P90 personal defense weapon, which also shoots the 5.7×28 round, and the cartels are obtaining some of these weapons and the armor-piercing ammunition from them and not from the United States. Conversely, we see bulk 5.56 mm and 7.62 mm ammunition bought in the United States and smuggled into Mexico, where it is used in fully-automatic AK-47s and M16s purchased elsewhere. As noted above, China has become an increasingly common source for military weapons like grenades and fully automatic assault rifles in recent years.

To really understand Mexico’s gun problem, however, it is necessary to recognize that the same economic law of supply and demand that fuels drug smuggling into the United States also fuels gun smuggling into Mexico. Black-market guns in Mexico can fetch up to 300 percent of their normal purchase price — a profit margin rivaling the narcotics the cartels sell. Even if it were somehow possible to hermetically seal the U.S.-Mexico border and shut off all the guns coming from the United States, the cartels would still be able to obtain weapons elsewhere — just as narcotics would continue to flow into the United States from other places. The United States does provide cheap and easy access to certain types of weapons and ammunition, but as demonstrated by groups such as the Revolutionary Armed Forces of Colombia, weapons can be easily obtained from other sources via the black arms market — albeit at a higher price.

There has clearly been a long and well-documented history of arms smuggling across the U.S.-Mexico border, but it is important to recognize that, while the United States is a significant source of certain classes of weapons and ammunition, it is by no means the source of 90 percent of the weapons used by the Mexican cartels, as is commonly asserted.