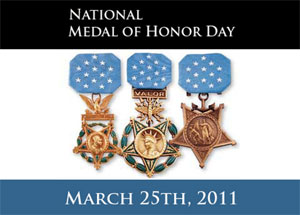 A number of years ago I noticed an elderly gentleman parking his car at a local grocery store. What caught my eye was his license plate. It was a specialized plate from the State of North Carolina and it said “Congressional Medal of Honor”.

The gentleman in question was Max Thompson who was awarded the Congressional Medal of Honor for his actions in battle near Haaren, Germany. I regret that I didn’t stop to speak with Sgt. Thompson and thank him but I wanted to respect his privacy while he was doing the mundane chore of grocery shopping. His citation is below:

On 18 October 1944, Company K, 18th Infantry, occupying a position on a hill near Haaren, Germany, was attacked by an enemy infantry battalion supported by tanks. The assault was preceded by an artillery concentration, lasting an hour, which inflicted heavy casualties on the company. While engaged in moving wounded men to cover, Sgt. Thompson observed that the enemy had overrun the positions of the 3d Platoon. He immediately attempted to stem the enemy’s advance single-handedly. He manned an abandoned machinegun and fired on the enemy until a direct hit from a hostile tank destroyed the gun. Shaken and dazed, Sgt. Thompson picked up an automatic rifle and although alone against the enemy force which was pouring into the gap in our lines, he ??fired burst after burst, halting the leading elements of the attack and dispersing those following. Throwing aside his automatic rifle, which had jammed, he took up a rocket gun, fired on a light tank, setting it on fire. By evening the enemy had been driven from the greater part of the captured position but still held 3 pillboxes. Sgt. Thompson’s squad was assigned the task of dislodging the enemy from these emplacements. Darkness having fallen and finding that fire of his squad was ineffective from a distance, Sgt. Thompson crawled forward alone to within 20 yards of 1 of the pillboxes and fired grenades into it. The Germans holding the emplacement concentrated their fire upon him. Though wounded, he held his position fearlessly, continued his grenade fire, and finally forced the enemy to abandon the blockhouse. Sgt. Thompson’s courageous leadership inspired his men and materially contributed to the clearing of the enemy from his last remaining hold on this important hill position.

Sgt. Thompson passed away in 1996 at the age of 74. So on this day we should remember the bravery and sacrifice of men like Sgt. Thompson and living recipients like Staff Sgt. Sal Giunta. This country would not be what it is without men like them.