The Complementary Spouse has two daughters – one in the St. Louis area and the other in the piedmont of North Carolina. In other words, not right next door to us. Thus, we were on our own for Mother’s Day.

After coffee and cake in bed while we attended the Church of CBS Sunday Morning, we finally got moving and headed out to Bear Arms in Brevard. I had scored a couple of Living Social coupons that gave us all day shooting for $5 each. We thought it would be fun way to spend a rainy afternoon.

The Complementary Spouse wanted to try out other 9mm pistols (in addition to her full-size M&P9) and I wanted to shoot my new Ruger SR1911 and my new-to-me EAA Witness in .38 Super. The Witness was a full-size, steel-framed pistol made in 1995 by Tanfoglio and had a tricked-out flat trigger for competition. This would be the first time I had shot either the SR1911 or the Witness.

We started by trading back and forth with my Ruger SR9 and SR9c.  The Complementary Spouse is coming along as a shooter and is growing in confidence. She just needs more practice and who of us doesn’t.

I then shot my SR1911 for the first time. I was amazed by how accurate it was. In the picture below, I have circled my first seven shots. It was done at 7 yards. I’m an OK shot but no where near a great shot. I was shocked that I could group it like that. 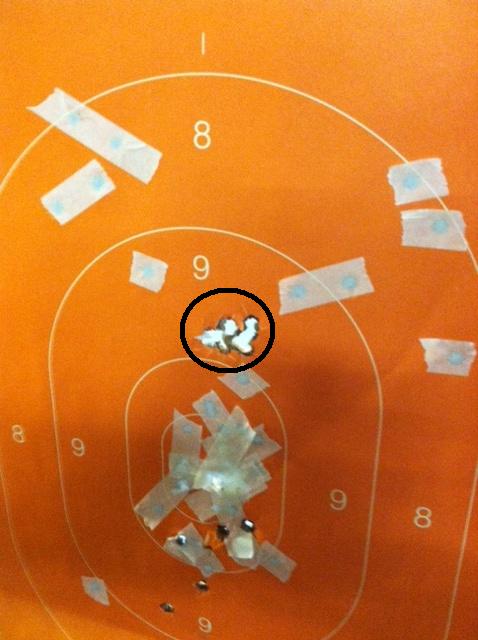 In addition to shooting the two 9mm pistols, the Complementary Spouse shot both the .38 Super Witness and the .45 SR1911. While she did OK, she really didn’t care for the additional recoil. Both are large pistols which are harder to grip with small hands which I think has much to do with the additional felt recoil.

I ended the range session by shooting the Witness at 10, 15, and 20 yards at a regulation USPSA target. My goal was to take my time, concentrate on the fundamentals (trigger control, breathing, stance, grip, and sight picture), and keep all my shots in the A zone. I succeeded at 10 yards and then it progressively worsened with the additional distance. That said, it was a good exercise and made me concentrate on the basics. It transitioned the range session from plinking to actual practice.

We ended the day out with a quiet dinner at a local cafeteria. Our Mother’s Day wasn’t exciting but definitely was satisfying.