The DC Project started by retired police officer and 3-Gun champion shooter Dianna Muller will once again descend on Congress this June. Composed of women from each of the 50 states (or darn close to it), they visit Congressional offices promoting a pro-Second Amendment message. 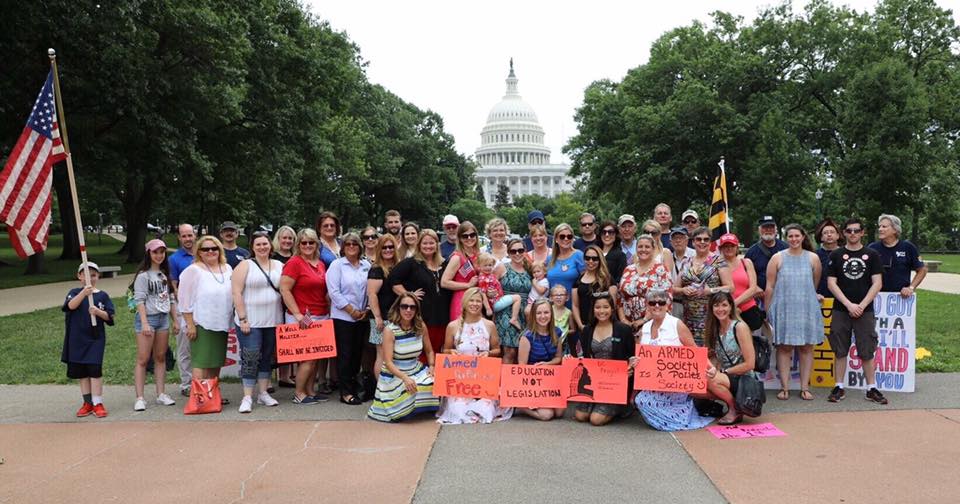 While they have some sponsorships, they are seeking funding through a GoFundMe page. Their goal is to raise $25,000 and they could use your support in their efforts.

The Girl and A Gun Women’s Shooting League is a presenting sponsor. Their announcement on the event is below:

AUSTIN, TX — Women from around the country are preparing to travel to the U.S. Capitol as part of the DC Project, a nonpartisan initiative that brings 50 women, one from each state, to Washington, DC, to meet with their legislators about issues addressing the Second Amendment. The women, who will be meeting with Congressional members and staff from June 20-23, 2018, have diverse professional experiences, ethnicity, and political beliefs, but share a common interest centered on the appreciation of America’s gun culture.

The DC Project was started by champion shooter Dianna Muller in 2016 to encourage female shooters to meet with legislators in order to give politicians a direct connection to the fastest growing demographic of gun owners. Females provide unique stories and perspectives on the attraction of the 2nd Amendment, including competition shooting sports, commerce, self-defense, hunting, and conservation.

“The Second Amendment is part of the United States Constitution and does not belong to one party,” said Muller. “Female gun owners are diverse, and have individualized stories and accounts of why this Amendment is so important to them. These stories need to be shared as they are representative of many within legislators’ constituencies.”

A Girl & A Gun Women’s Shooting League (AG & AG) is the presenting sponsor of the DC Project. With a nationwide network of firearms instructors and female gun owners, AG & AG is a strong voice for the Second Amendment. Robyn Sandoval, Executive Director, is making her third trip with the DC Project to meet with lawmakers on Capitol Hill.

“A Girl & A Gun is honored to be a part of this initiative. As a mother who was a supporter of gun control for decades, I now devote my life to empowering women with the safe use and storage of firearms,” said Sandoval. “It is important that our lawmakers learn our stories and have access to our resources for education on gun-related issues.”

The DC Project will host several events during the week as participants give speeches and meet with lawmakers to address the rising demographic of female gun ownership; the value of the 2nd Amendment in today’s society; and the importance of the preservation of America’s gun culture, from conservation and commerce to competitive sports, hunting, and self-defense.

For more information on the DC Project visit: http://dcproject.info

About A Girl & A Gun

A Girl & A Gun Women’s Shooting League (AG & AG) is a membership organization whose events have been successful stepping stones for thousands of women into the shooting community and fostered their love of shooting with caring and qualified instructors to coach them. AG & AG breaks barriers for women and girls in the area of self-defense and in pistol, rifle, and shotgun shooting sports by welcoming beginners to learn the basics of safe and accurate shooting and providing experienced shooters with advanced-level opportunities. The club has more than 5,000 members in 48 states, with chapters that host recurring Girl’s Nights Out at more than 150 ranges throughout the nation.