Before there was the FN SCAR-L, the Bushmaster ACR, the Ruger SR556, or any of the other piston-driver AR-15 variants, there was the South Korean-made Daewoo K1 and K2 assault rifles and their semi-auto brethren, the AR-100/Max II/DR-100 and DR-200.

Adopted as the primary service rifle (K2) and carbine (K1) by the Republic of Korea (ROK) Army in 1987 to replace their American M-16A1’s, they were originally made by the South Korean chaebol Daewoo Industries’s subsidiary Daewoo Precision Industries, Ltd. After the Daewoo chaebol was broken up because of political scandal and financial difficulties, parts of it were bought by S&T Holdings. The new company S&T Daewoo took over production of small arms for the ROK Army.

The various Daewoo models are a unique combination of aspects of both the AR and the AK rifles. It uses the NATO standard 5.56×45 cartridge and will accept most AR-15 magazines. Like the AR-15, the Daewoo uses an aluminum upper and lower receiver that hinges with a front pivot-pin. The fire control group is interchangeable with the AR-15 though there are some variances in the full auto version. It uses a charging handle similar to that of the FN-FAL except that it is on the right side of the receiver. The mag release and safety are similar to and in the same relative positions as the AR-15.

Where it starts to be more like the AK-47 is that it trades the direct gas impingement system of the AR for a long-stroke piston system that sits atop the barrel. A 4-position gas regulating plug is at the end of the piston assembly. As a result, the Daewoo runs much cleaner.

The selective-fire military versions used by the ROK Army and some other militaries, Peru for example, can be fired in semi-auto, 3-shot burst, and full auto.  It uses a rotating bolt that is similar in appearance that of the AR-15. Unlike the AK-47, the bolt of the Daewoo attaches directly to the piston. The K2, AR-100, DR-100, and Max II all have a 1 in 7 twist barrel. The DR-200 and K1 use a 1 in 12 twist barrel.

The video below illustrates the Daewoo Max II and its inner workings. The Max II was also named the AR-100 and DR-100.

Civilian versions of the Daewoo were imported into the United States up until 1997. The AR-100 and Max II were imported up until 1989 when their import was banned by an Executive Order by President George H. W. Bush. Any Daewoo of the K1, K2, or AR-100 type were effected by the ban. The Clinton assault weapon ban listed both the AR-100 and AR-100c. Among the importers of the Daewoo were B-West of Tucson, AZ and Kimber of America of Clackamas, OR (predecessor to today’s Kimber). The last models imported were the DR-200 in 5.56 and the DR-300 in 7.62×39. 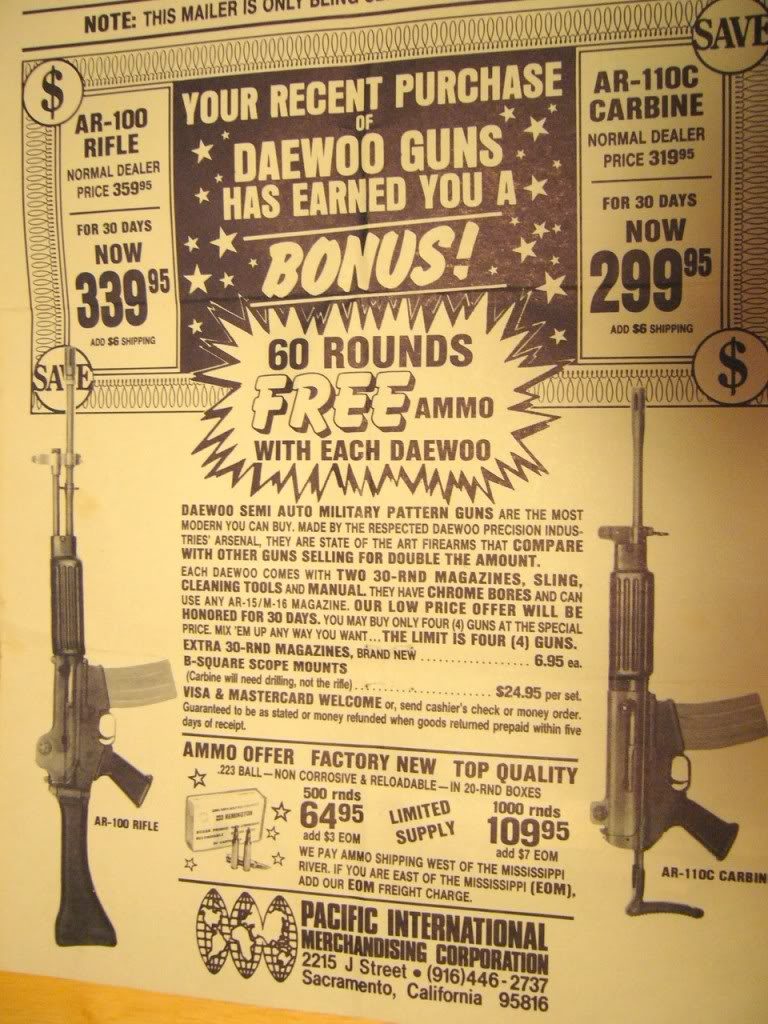 While there is speculation that importation of the Daewoo’s stopped because of Bill Clinton’s 1997 Executive Memorandum 7 – Importation of Certain Semiautomatic Assault Rifles, I think that is probably convenient but incorrect. Daewoo Industries ran into tremendous financial difficulties in 1998 and was actually dismantled by the Korean Government in 1999. At the same time, Kimber had reorganized from its Kimber of Oregon days and was moving towards production of 1911’s and away from being an importer.

So you would think that a firearm without an importer, without ready access to spare parts, part of a class targeted by the gun controllers, and with an ugly stock would just fade away into oblivion, wouldn’t you? If so, you’d be wrong. The unique features and reliability of the DR-200 combined with active Internet forums, gunsmiths, and specialty parts manufacturers have kept it alive. Moreover, with the sunset of the 1994 Assault Weapons Ban, owners can now modify their Daewoo’s with American-made parts and keep it Sec. 922r compliant. Prices for the Daewoo DR-200 in mint condition average in the $750 to $1000 range. They do show up on the auctions sites like GunBroker.com with regularity.

Two of the best forums to learn more about and to discuss the Daewoo rifles are the Woo-Files forum on FalFiles.com and the Yahoo DR200 Group. The leading experts and gunsmiths for the Daewoo are regular visitors to these forums. Many pictures and files have been posted over the years that give the Daewoo owner ideas on how to modify his or her DR-200.

Suppliers of spare parts and items with which to modify the DR-200 include Ace Ltd. for stocks, CNC Warrior for replacement firing pins and gas plugs, Daewoorifleparts.com for all sorts of replacement parts, and StormWerkz for scope mounts, stock adaptors, and handguard rails. I have dealt with Ace Ltd for a pistol grip and stock and with StorkWerkz for a stock adaptors. I can recommend both of them without reserve.

If you are handy with tools, you can make most of the upgrades yourself. Replacing the thumbhole stock with either a folding stock like the Max II or an AR-type stock is relatively easy. Removing the existing can to put on a muzzle break or flash hider can be more involved. Because the barrel is already threaded, you have to be careful to remove the can without damaging the threads. Methods include heating it with a MAPP torch to break the solder joint or using a Dremel tool and cold chisel. If you don’t want to do it yourself, most gunsmiths should be able to do the work. Moses with CMP Armory specializes in shortening the barrel, recrowning it, and then installing a flash hider.

So if you want a piston-driven rifle in 5.56 should you take a change on the Daewoo DR-200? Maybe. If you want something new or something with a large community of users, then the answer is no. If you are willing to be a bit off-beat and can obtain a DR-200 at a reasonable price, I’d say go for it.