She asked what I thought and I said it was up to her. I did say it would be a good way to get a proper introduction to handgun shooting and safety. I also thought it would be much better if I wasn’t the one doing it. I had heard too many horror stories of boyfriends teaching girlfriends to shoot and really botching it.

The Complementary Spouse decided she wanted to do it mostly because it was her constitutional right as an American and because she thought it would be smart to know more about my guns in case of an emergency. Moreover, since the class was going to held on her birthday, it would make it very memorable.

We spent a good deal of Friday night going over some of the information that is presented in the North Carolina course. She found a few websites that detailed the information and she studied them closely. I showed her the differences between a revolver and a semi-automatic pistol. We went over how each were loaded, reviewed safety rules, and how to properly grip a pistol. We also found out she was cross dominant – left eyed, right handed. She really didn’t want to go into the class unprepared and she didn’t.

Saturday morning came early as she was meeting her friend at 7:15 for breakfast. I sent her off with a cup of coffee and a kiss. 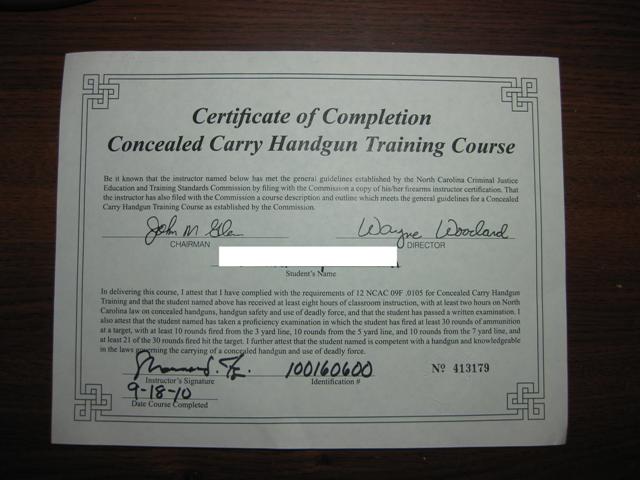 When she got home at around 6pm, she was just bubbling. She had a great time, learned a lot, and shot straight. In her shooting test, she had 29 center of mass with only one flyer which hit in the belly button region. She plans to go ahead and apply for her Concealed Handgun Permit. She isn’t sure if she will carry but she believes it is important to go on record so as to secure her rights to do it. I am really, really proud of her.

She said she wants to continue shooting as she had a great time. Isn’t that the way it should be? As Tom Gresham always says on GunTalk, take someone shooting this week. When a new person is introduced to shooting, they quickly realize that what the media and the Bradys say about gun owners is an outright lie.

One thought on “So Proud”