An autograph auction house, Alexander Autographs, is auctioning a note sent by Barack Obama on White House stationary saying he supports the Second Amendment. The note was in response to a letter sent to him by a gentleman who noted how much money is raised for wildlife conservation by the sale of firearms and ammunition. The letter is included with this autographed note. You can read the full letter on the Alexander Autographs auction page above. 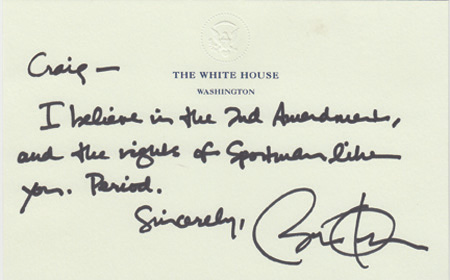 More on the auction and on Obama’s stance on gun rights is in a story from U.S. News and World Report’s Washington Whispers column entitled Obama Backs Gun Rights.