“Once is happenstance. Twice is coincidence. Three times is enemy action”

Auric Goldfinger to James Bond in Ian Fleming’s Goldfinger.
It started with State Rep. Randy Dunn (D-Kansas City) who introduced House Bill 1940 into the Missouri House of Representatives. His bill would imposed a duty to retreat when faced with a threat. In effect, it would nullify the Castle Doctrine in the state of Missouri.


“It would require a person to attempt to retreat if at all possible when facing danger,” he said.


A defendant must also prove they had no other option than to use deadly force as opposed to the prosecution as it is under the current statue. The third provision would disallow automatic immunity from a civil lawsuit for anyone who uses deadly force or shoots someone.

Then it continued with a move by Rep. Harold Mitchell (D-Spartanburg) to repeal South Carolina’s version of the “stand your ground” law. Mitchell, chairman of the SC Legislative Black Caucus, introduced the bill along with 17 co-sponsors. House Bill 4801 requires a duty to retreat anywhere except in a person’s home.

From The State of Columbia, SC:


The chairman of the state Legislative Black Caucus, backed by several ministers, former law enforcement officials and activists, has introduced a bill to repeal South Carolina’s “Stand your ground” law.

The bill would not do away with residents’ longstanding right to defend themselves with deadly force while inside their homes, vehicles and businesses, Rep. Harold Mitchell, D-Spartanburg, stressed at a Thursday news conference at the State House.

But the bill – which has 17 co-sponsors in addition to Mitchell – would eliminate the “Stand your ground” legal defense used by those who use a knife or gun to kill or wound people in public places, then claim they used deadly force because they feared for their lives.

“‘Stand your ground’ is ‘last man standing.’ What we want to do is go back and protect people in their homes, their vehicles and their place of business,” Mitchell said.

And finally, the Detroit’s chapter of the National Action Network is seeking to a referendum measure put on the November ballot in Michigan that would repeal that state’s “stand your ground” laws. According to Fox 2 Detroit, the group was headed today to the state capitol in Lansing to lobby lawmakers to repeal “stand your ground”. I have no doubt that they will find a sympathetic lawmaker who will do their bidding and introduce such as bill.

The National Action Network referred to above is run by the Rev. Al Sharpton who led a rally in Tallahassee yesterday to repeal that state’s “stand your ground” law. The move to repeal “stand your ground” laws is also supported by Attorney General Eric Holder despite the fact that a study in Florida found that African-Americans benefited from using that state’s law as a defense at a rate out of proportion to their numbers in the population.

As to who is coordinating this attack on both the castle doctrine and stand your ground laws, I’m not sure. However, seeing these efforts in states as disparate as South Carolina, Michigan, and Missouri leads me to believe that some sort of coordination is going on. While the Rev. Al can raise hell with his rallies, I just don’t see him as being behind legislative efforts. It doesn’t fit his profile.

If you have seen similar efforts in your state, let me know in the comments or pop me an email.

UPDATE: It seems the Demanding Mommies have a petition against stand your ground laws according to their Facebook page. Given that they are now merged with Bloomberg’s Illegal Mayors, perhaps, and I say just perhaps, this is the next Bloomberg initiative. The curious thing is that all the efforts we have seen so far – Missouri, South Carolina, and Michigan – are African-American led efforts and I just don’t see much solidarity between them and the suburban Demanding Mommies. 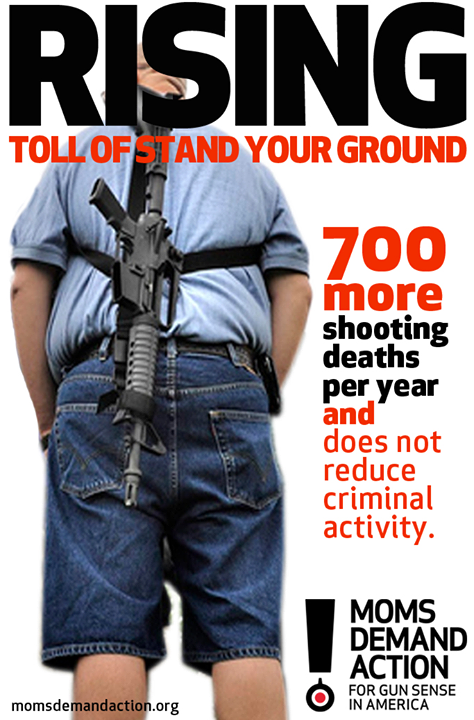