In the lawsuit the NRA brought against the Bureau of Alcohol, Tobacco, Firearms, and Explosives, D’Cruz et al v. BATFE et al, James D’Cruz is being replaced as the lead plaintiff. According to the court filing, his parents have moved from Lubbock, TX to Titusville, FL and Mr. D’Cruz has chosen to move with them. He was given permission by the court to withdraw from the case as the lead plaintiff.

Plaintiff’s attorneys were given permission to file a Second Amended Complaint. The amended complaint was filed on February 11th. Rebekah Jennings and Brennan Harmon will be joining Andrew Payne as the individual plaintiffs in the case. 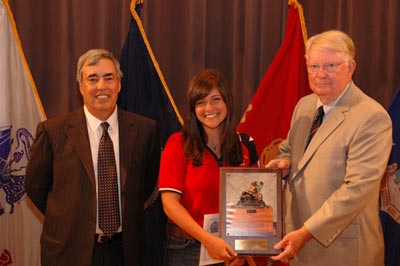 Ms. Jennings paired with another Texas junior shooter, Zach Hedrick, to win the Junior National Trophy Team match. You can see the picture of them below accepting that trophy. 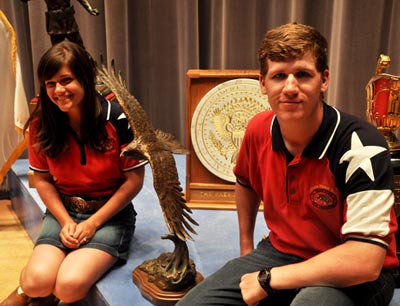 The other new plaintiff is Brennan Harmon of San Antonio, TX. While Ms. Harmon currently owns both a rifle and a shotgun, she would like to purchase a pistol for self-defense according to the amended complaint. Of course, she and Ms. Jennings are both precluded from purchasing pistols due to current Federal law and regulations.

In a move that will greatly disappoint Paul Helmke and Josh Horwitz, Facebook pages for both Ms. Jennings and Ms. Harmon feature no pictures except for a profile picture. I am guessing that the NRA attorneys “sanitized” their Facebook pages to prevent having them dragged through the mud like Helmke and Horwitz attempted to do to James D’Cruz. Still I would put nothing past either Helmke or Horwitz in pursuit of their goal of gun prohibition.

James D’Cruz is still listed as the lead plaintiff in D’Cruz et al v. McCraw et al. This case is the challenge to the age 21 requirement to obtain a Texas CHL. I would not be surprised to see this change as well with Mr. D’Cruz’s move to Titusville, FL to live with his parents. If this does change, I will have an update.

Is Texas the proper venue for a non-resident to sue? I don’t know for sure but would guess it would be.

Below is the Texas requirements for a non-resident license as taken from their CHL Handbook.

GC §411.173. NONRESIDENT LICENSE. (a) The department by
rule shall establish a procedure for a person who meets the eligibility
requirements of this subchapter other than the residency requirement
established by Section 411.172(a)(1) to obtain a license under this
subchapter if the person is a legal resident of a state another state
or if the person relocates to this state with the intent to establish residency
in this state. The procedure must include payment of a fee in an
amount sufficient to recover the average cost to the department of
obtaining a criminal history record check and investigation on a
nonresident applicant. A license issued in accordance with the procedure
established under this subsection:
(1) remains in effect until the license expires under Section
411.183; and
(2) may be renewed under Section 411.185.
(a-1)*[repealed by Act effective September 1, 2005, 79th Leg., R.S., H.B. 225, §4.]
(b) The governor shall negotiate an agreement with any other state
that provides for the issuance of a license to carry a concealed
handgun under which a license issued by the other state is recognized
in this state or shall issue a proclamation that a license issued by the
other state is recognized in this state if the attorney general of the
State of Texas determines that a background check of each applicant
for a license issued by that state is initiated by state or local authorities
or an agent of the state or local authorities before the license is issued.
For purposes of this subsection, “background check” means a search
of the National Crime Information Center database and the Interstate
Identification Index maintained by the Federal Bureau of Investigation.
(c) The attorney general of the State of Texas shall annually:
(1) submit a report to the governor, lieutenant governor, and
speaker of the house of representatives listing the states the attorney
general has determined qualify for recognition under Subsection (b);
and
(2) review the statutes of states that the attorney general has
determined do not qualify for recognition under Subsection (b) to
determine the changes to their statutes that are necessary to qualify
for recognition under that subsection.
(d) The attorney general of the State of Texas shall submit the report
required by Subsection (c)(1) not later than January 1 of each calendar
year.

5 thoughts on “Changes In NRA Lawsuits In Texas”