The Coalition to Stop Gun Violence (CSGV) seeks “to secure freedom from gun violence through research, strategic engagement and effective policy advocacy” according to their self-description. There is a lot of things you can say about CSGV and their methods.

However, classy isn’t one of them. 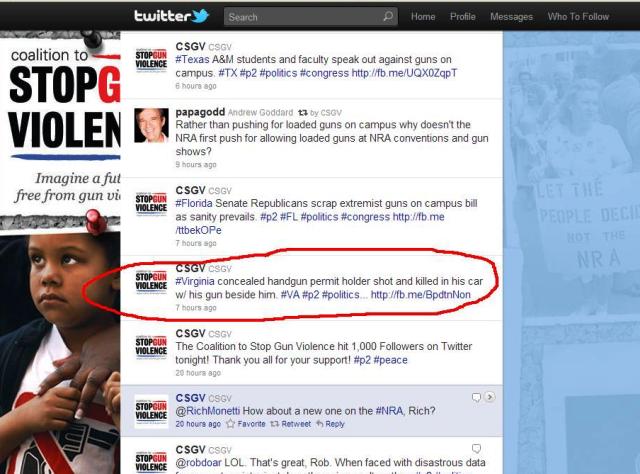 The above comes from Bassett, Virginia. In the story in the Martinsville Bulletin, Rasheem Alonzo Penn of Bassett was murdered while he sat in his car. He had been having a conversation with Brandon Manns who had come up to his car. Manns, a convicted felon, is charged with shooting Penn twice in the head. So what did the CSGV focus on? It was this,

Inside the Expedition, officers found a fully loaded 9 mm handgun in the center console, (Henry County Sheriff’s investigator Corey) Reynolds testified. The console was closed, glass was on top of it, and it had no odor of a fired gun, all of which led Reynolds to conclude that that gun had not been fired, he testified.

Penn owned the gun and had a valid concealed carry permit, Reynolds testified.

From the description of the event by eyewitnesses, there was no loud argument and nothing that gave off any vibes that a shooting was about to happen. If this is correct, I doubt even the best trained person would have had time to react to prevent from being shot. The fact that Mr. Penn held a CCW is irrelevant in this situation – except to the grave dancers at CSGV.

The next two tweets involved a spousal murder and a training accident. 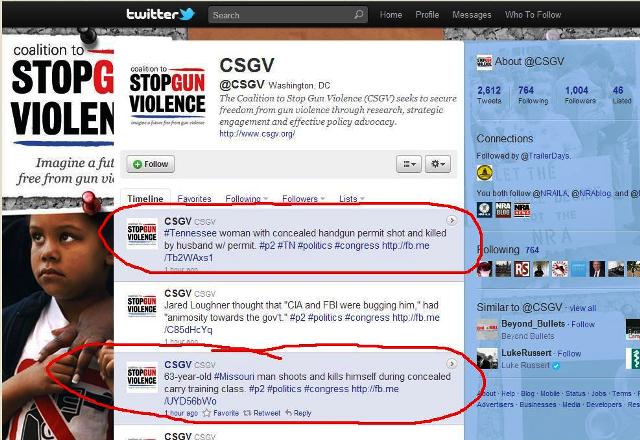 The spousal murder involved Thomas and Micah Rine Pate of Bartlett, TN. According to the story in the Memphis Commercial-Appeal, the Pates had a troubled marriage and were seeing a marriage counselor. Thomas Pate is accused of murdering his wife and then hiding her body by the Loosahatchie River near Lakeland, TN. If you look at the tweet pictured above, the most important thing about this case according to CSGV was the following.

The husband and wife both had gun permits and Pate said he accidentally shot his wife in the back of the head when she walked in front of him while they were target practicing near the river.

The fact that Thomas Pate may have been cheating on his wife, that they had marital problems, that she was upset by his anger, and that he may have been abusing drugs and alcohol is irrelevant according to their tweet.

The final tweet involved Glenn Seymour of Douglas County, Missouri. Mr. Seymour died from an accidental, self-inflicted gunshot to the chest while in a concealed carry permit training class. The class was being taught to shoot with their non-dominant hand. Mr. Seymour pointed the muzzle of the pistol towards himself while trying to manipulate the manual safety. As SayUncle has pointed out, Mr. Seymour violated two of the four rules of firearm safety. The accident involving Mr. Seymour was a training issue and a supervision issue. That it happened in a CCW class was incidental to these issues.

All three deaths involved concealed carry in only the most tangential manner. But if you went by the tweets from the Coalition to Stop Gun Violence, you would have thought that the CCW was the central aspect of their deaths.

3 thoughts on “Dancing On Graves”