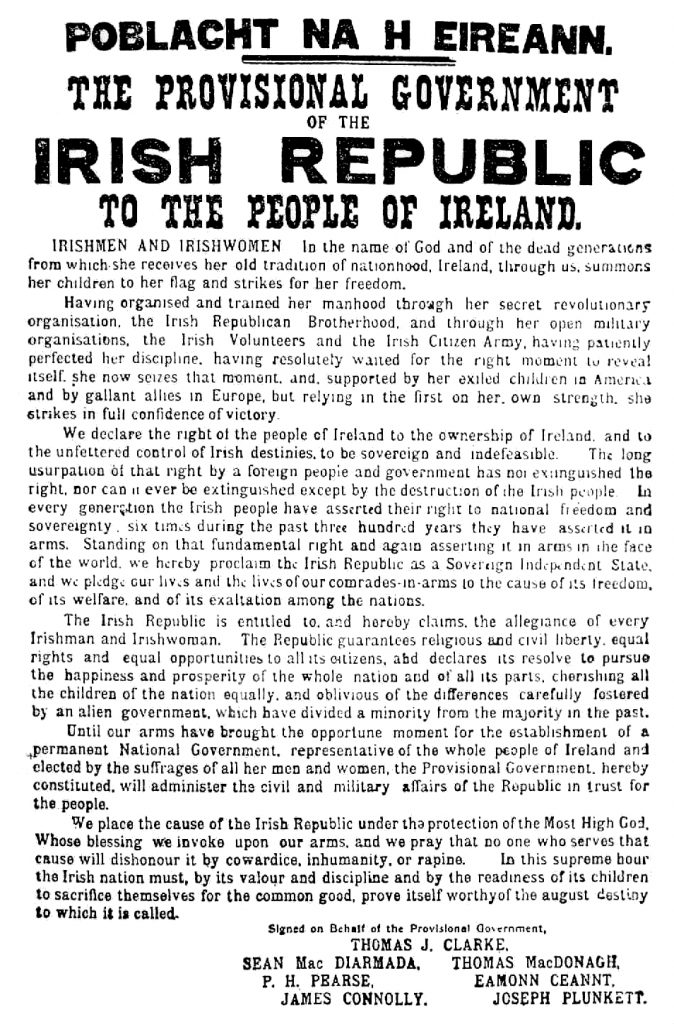 95 years ago today, in what has become known as the Easter Rising, the Irish Republican Brotherhood, the Irish Citizens Army, and the Irish Volunteers occupied key buildings and locations in Dublin. These included the GPO (General Post Office), the Four Courts, St. Stephen’s Green, Dublin City Hall, and other locations. However, they failed to capture the center of British rule, Dublin Castle, despite an attack on it.

While the British were caught by surprise by the Easter Rising, they regrouped and crushed it over the next few days. Patrick Pearse, who was acting commander at the GPO, ordered a surrender on Saturday, April 29th. The remaining rebel held locations surrendered as well.

Between May 3rd and May 12th, the seven men who had signed the proclamation of the Irish Republic were executed by British firing squads along with another 8 Irish republicans. Another 1480 men were interned in England and Wales until December 1916. These internment camps became known as the University of Revolution as many of those interned would later become leading figures in the Irish War of Independence (1919-1921).

The Easter Rising was a premature act met with ambivalence – and even hostility – by many Irishmen. The over-reaction of the British government after the rebellion was crushed helped to swing the public mood in Ireland from ambivalence and hostility towards the Easter Rising to increased support for Irish Nationalism. The Irish Free State came into existence in 1922 after the Anglo-Irish Treaty was signed to end the hostilities of the Irish War of Independence. Thus, the proclamation of an Irish Republic in the Easter Rising did lead to the establishment of an independent Ireland.

One thought on “95 Years Ago Today”