As I mentioned in an earlier post, the Ruger SR1911 and the Gunsite Scout Rifle were the big attractions at their booth. On Saturday, Ruger held a couple of presentations on the thinking that went into this version of the Scout Rifle. The presentations featured Michael Bane and trainer Dave Spaulding. 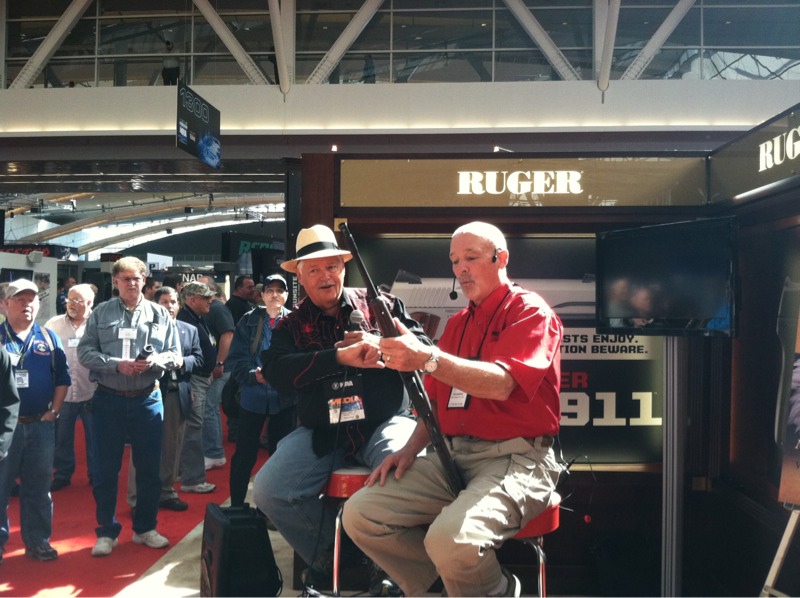 For those unfamiliar with it, the concept of the Scout Rifle was developed by the late Col. Jeff Cooper. It was meant to be a general purpose rifle that could be used for hunting as well as self-defense. It is usually built on a bolt-action carbine and features a forward mounted scope to allow quick acquisition of a target with both eyes open. Col. Cooper collaborated with the Austrian company Steyr Mannlicher to develop the first commercial Scout Rifle which was an interesting rifle but quite expensive.

The first major difference from prior Scout Rifles is the magazine. Michael and Dave said the M-14 magazine was considered at first. However, this was discarded because of the many variations in the “mil-spec” M-14 magazines on the market. Instead they went with the Accuracy International magazine. This magazine though expensive is virtually bullet-proof and can take a lot of abuse. It will be offered in 5 and 10-round versions as some states limit the size of a magazine in hunting rifles.

Another feature of this version of the Scout rifle is the adjustable recoil pad on the buttstock. It will allow you to shorten the length of pull to accommodate heavier clothing or leave it as is for lighter clothing.

One of the questions from the crowd concerned scopes for this rifle. While set up for the an intermediate relief scope, the rifle also can be used with the more traditional scopes as the receiver has cuts for the Ruger scope rings in addition to the Picatinny rail. There was some discussion about being careful not to use too high a magnification as well. Currently, Leupold makes two Scout scopes – a fixed 2.5x scope and their brand new 1.5-4 variable scope. Burris is the other Scout scope maker with a fixed 2.7x scope.

I asked about the absence of a third swivel stud for use with a Ching Sling. After Michael accused me of being a plant for Andy Langlois, maker of the best leather Ching Slings, Dave responded by saying that some of those who tested the rifle had problems with it getting in the way as they wanted to hold the rifle by the magazine. Galco does make their Safari Ching Sling which doesn’t require the third stud. However, both agreed that if you held the rifle with your hand forward on the stock the regular Ching Sling is good. Michael noted that he had added the third stud to his rifle for Andy Langlois’s Ching Sling. I do have one of Andy’s Ching Slings and it is really nice leatherwork.

I think sales of this rifle will be good. On Friday, I spoke with Bryan Tucker of Davidsons and the Gallery of Guns who said a limited number were in the distributor pipeline under an allocation system. At that time they had 18 in inventory. When I checked on Saturday morning, all of these had been sold.

The street price of the Ruger Gunsite Scout Rifle seems to be in the $750 range plus or minus a few dollars. I have always like the Scout rifle concept and have a Ruger Frontier that I was slowly converting into a Scout rifle. I’m not sure if I’ll continue that conversion but I will definitely be ordering one of the new Gunsite Scout Rifles.