Sturm, Ruger has followed up on the release of their SR-40 from last fall with the the compact version SR-40c. 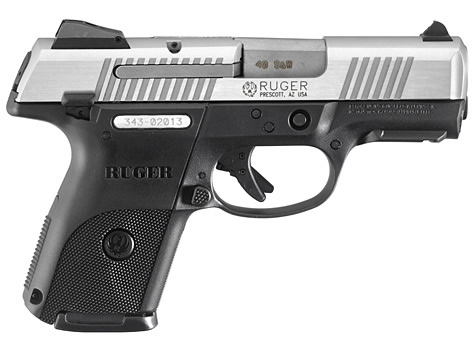 Sturm, Ruger & Company, Inc. (NYSE: RGR) is proud to announce the introduction of the Ruger® SR40c™ pistol. The SR40c is the compact version of the recoil reducing, striker-fired SR40™ pistol, one of the slimmest and most ergonomic full-sized .40 caliber pistols on the market today.

The SR40c is based on the same high-performance glass-filled nylon frame as those used on the popular SR9®, SR9c™ and SR40 pistols, offering the same, great ergonomic features, including a slim frame, short trigger reach, reversible backstrap, and ambidextrous controls. The SR40c features a through-hardened, stainless steel or alloy steel slide with Nitridox Pro Black finish. Serrations on the front portion of the slide make it easier to manipulate the slide and press check the chamber.

“The SR40c provides all of the benefits of a full-sized handgun without the recoil often associated with smaller .40 caliber pistols,” said Mike Fifer, Ruger CEO. “The SR40c offers yet another strong concealed carry option from Ruger, perfect for personal protection or law enforcement plain clothes and backup applications,” he continued.

The Ruger SR40c pistol has a 3.5″ barrel and an overall length of 6.85″. The pistol weighs 23.40 oz. and features a height of 4.61″, with the same slim 1.27″ grip width (across safety levers) as the full-sized SR40. It has a fully adjustable 3-dot sight system and an integral accessory rail that accommodates most lights and lasers. The SR40c offers modern safety features such as a visual and tactile loaded chamber indicator, striker blocker, trigger safety, magazine disconnect and an ambidextrous, frame-mounted manual safety.

The SR40c ships with two magazines that provide options in both capacity and grip size. The standard magazine holds 9 rounds and features a flat bottom butt plate; a finger grip extension floor plate included. The second magazine features a grip extension and holds 15 rounds, instantly transforming the smaller, compact grip into a full-sized grip. An anti-friction coating is applied to the magazine body to reduce the force required to load the magazines to full capacity.

For customers living in states or locales where magazine capacity is limited by law, an SR40c that ships with two, 9-round magazines is offered.

Jeff Quinn of GunBlast.com has released a video review of the SR-40c. He likes it and he likes the size of it.

While I do have a couple of semi-auto .40’s, I have to admit that I’m just not a big fan. As with all caliber choices, it is a matter of personal preference. I like 9mm and .45 ACP better. That said, I’m sure Ruger will sell a ton of these pistols to those who like the caliber.

In the interest of full disclosure, I own stock in Sturm, Ruger (RGR). It is one of the two publicly-traded firearms companies in the United States.