Kurt Hofmann, the St. Louis Gun Rights Examiner, ran a story on Monday about how the St. Clair County (Illinois) Board thinks a local gun club’s range is a threat to the safety of aircraft at Scott Air Force Base and MidAmerica-St. Louis Airport. They are even prepared to use eminent domain to take over the club so as to close it down. They passed a resolution on July 25th by a 24-2 to authorize county officials to negotiate a sale or,  failing that, to use eminent domain to seize the property.

Mark Kern, the County Board chairman, said that experts have stated the gun club poses a threat to low-flying aircraft.

If board members want Scott to remain open, “this is the appropriate action to take,” Kern said. “But it’s important to protect Scott Air Force Base and those flying above the gun club.”

Given that airport safety is a major concern of the Federal Aviation Administration, you might think that they would be in agreement with St. Clair County that a rifle range is a threat to air safety. However, you would be wrong. Regarding the Caseyville Rifle and Pistol Club range, they said:

Al Richardson, an official with the FAA’s Des Plaines office, concluded in a May 2008 letter the gun club had complied with agency rules regarding aircraft safety.

As Kurt noted in his story Monday, St. Clair County Attorney Charles Swartout argued in court that the letter from the FAA was “hearsay” and “irrelevant” because Scott AFB is under the control of the military.

Apparently, we are to believe that the FAA only knows about civilian aircraft safety. It does seem rather puzzling that a shooting range would pose more risk to military aircraft than to civilian ones–wouldn’t it be the other way around?

Mr. Swartout’s argument additionally ignores the fact that MidAmerica-St. Louis Airport, a joint use facility, is actually closer to the gun range than Scott AFB. MidAmerica, to be quite frank, is a monument to pork barrel politics. Costing approximately $300 million to build, it doesn’t have any regularly scheduled air service since Allegiant Air pulled out in January 2011. As to cargo use, there is only one flight a week from MidAmerica to Colombia to bring in imported flowers.

As an aside, I am quite familiar with both Scott and MidAmerica as they are only a few miles away from my mother-in-law’s house in O’Fallon.

Let’s take a look at the club’s location and facilities. Below is a aerial photo of the range in relationship to both Scott and MidAmerica. The closest part of Scott’s main runway is 1.3 miles away. From MidAmerica, it is a mile to the Caseyville Rifle and Pistol Club’s ranges. You will also notice that there are significant wooded areas in between the range and both runways. 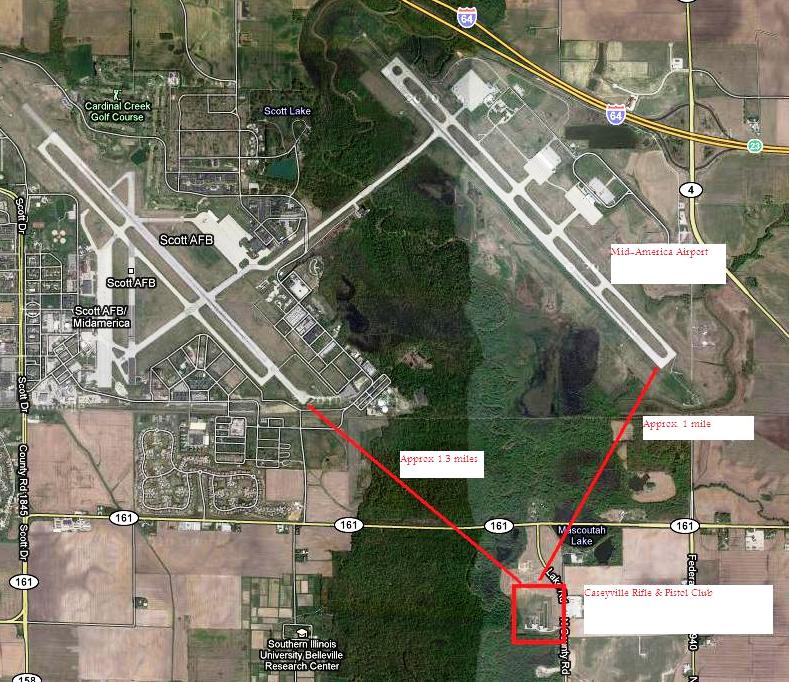 Now that we’ve seen the location in relationship to Scott and MidAmerica, let’s take a look at the ranges. Since the club only moved to this location in 2007, you would expect state of the art design features and the folks at Caseyville don’t disappoint. They have 200, 100, and 50- yard rifle ranges plus two pistol ranges with both berms and baffles to prevent stray bullets from escaping.

I would give an arm and a leg to have a range this nice within 50 miles of my home. It is well laid out, has nice facilities, and has kept the safety of the shooter and the public in mind. Given this, it is no wonder that officials with the FAA had no safety issue or problems with the range or its location.

Despite all of this, it seems to be the intention of the St. Clair County Board to use what they consider their bottomless pit of taxpayer funds to continue their fight to get the club’s land. Even the Belleville News-Democrat which ran a nonsensical editorial urging the club to sell out so as to save the taxpayers’ more money, recognizes that the goal of the county is to use their larger resources to outlast club in court. The county has already lost twice in court and now has headed to court for the third time.

It would be interesting to know the true agenda of County Board Chairman Mark Kern and the rest of the Democratic majority board. Are they really interested in safety or do they have a well-heeled political contributor who wants this land for his or her own development purposes? Reading the comments in response to the editorial urging the club to sell it seems the general consensus is the latter.

5 thoughts on “St. Clair County Board – We Know More About Air Safety Than FAA”