You will notice a new item on the right side of this blog. It is an avatar saying “Kilted to Kick Cancer”. Clicking on that will link you to the donations page for the Prostate Cancer Foundation.

The Complementary Spouse’s father passed away in January 2002 from it. When I first met him a couple of years earlier, he was a vigorous retiree enjoying fishing with his grandsons, spoiling his granddaughters, going to auctions to find interesting shotguns, carving wooden decoys, and hunting waterfowl and quail in southern Illinois.

He had been part of a prostate cancer study program at Washington University-St. Louis Medical School and was checked every six months for ten years. However, in the space of six months between the check-ups, his PSA had soared to 45 and the cancer was spreading. He lived somewhat over a year from the time of his diagnosis until he passed away. It was a rough year for his family not to mention him. It is something you wouldn’t wish on your worst enemy. 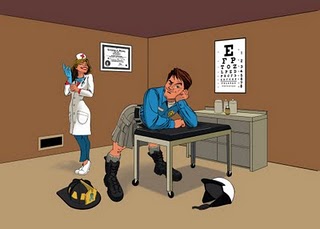 Early detection is important. I have a yearly urological exam including both a digital rectal exam and a PSA blood test. There is no reason to avoid either of these tests. If it will let me lead a long and productive life, I can deal with a little embarrassment. And frankly, the worst part of the digital exam is having to wipe off the excess surgical jelly after the exam.

The Prostate Cancer Foundation has the following recommendations as to when you should start being tested.

When to start screening is generally based on individual risk, with age 40 being a reasonable time to start screening for those at highest risk (genetic predispositions or strong family histories of prostate cancer at a young age).

Guidelines differ for men at average risk. Some recommend an initial PSA and DRE at age 40, and others recommend starting at age 50. In general, all men should create a proactive prostate health plan that is right for them based on their lifestyle and family history.

So I am asking that you click the link in the sidebar and donate to the Prostate Cancer Foundation. I would also suggest – strongly – that if you are man over the age of 40, you should discuss testing with your physician.

As to whether I’m going to get a kilt and wear it, time will tell!

4 thoughts on “Kilted To Kick Cancer”