Bob Chase owns a furniture store in Charleston, South Carolina which has a mostly vacant warehouse in a semi-industrial section of the city. According to the Charleston newspaper The Post and Courier, he’d like to convert this 6,000 square foot building into an indoor shooting range which seems a reasonable use in a city that has no indoor ranges. There are ranges in North Charleston and Summerville and outdoor ranges in the Francis Marion National Forest and Summerville.You can see the building in the picture below. 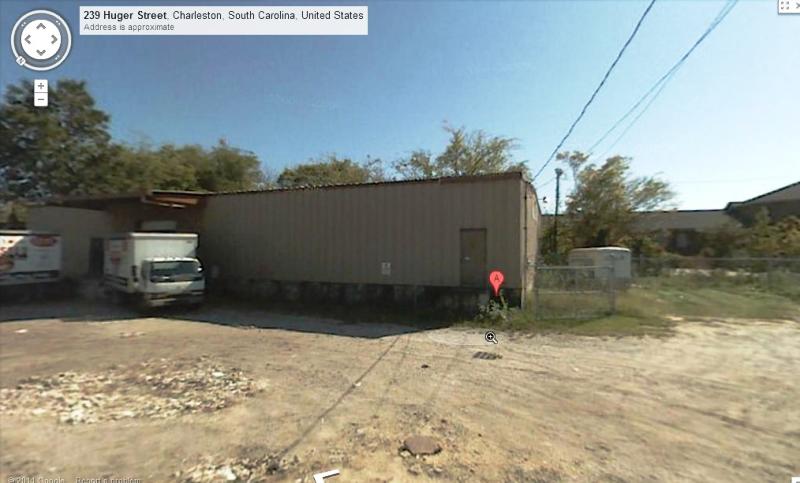 The problem for Mr. Chase is that he wants to open his range in a city headed by a member of Bloomberg’s Illegal Mayors. Mayor Joseph Riley has been mayor of Charleston for 36 years and a member of MAIG since 2009.

Mr. Chase had been meeting with city officials over his plans to open a range in the shadow of the on-ramp to the Ravenel Bridge which crosses the Cooper River. You can see this in the screen cap from Google Maps below which shows the street view as seen from the front of his warehouse. 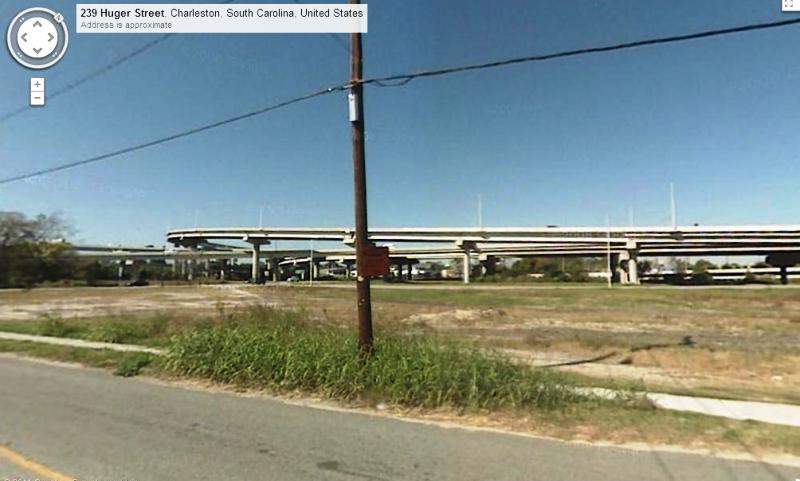 On September 13th, the Charleston City Council passed the first reading of two ordinances that would regulate ranges and the discharge of firearms within the city. (More on this meeting a bit later.) Mr. Chase was given no indication from city officials over their plans to move these ordinances and feels somewhat blindsided by their actions.

Chase said he had been meeting with city officials to discuss the project but had no idea the ordinances were coming. “They really met with me just as a ruse,” he said. “I feel it’s disturbing the city would not follow the rules it has.”

Chase said he supports the mayor, but added, “I don’t have the authority of picking and choosing the laws I follow, so why should they?”

By moving as they did to start consideration of new ordinances, the Mayor and City Council  have foreclosed any grandfathering of Mr. Chase’s property and he will be subject to the new zoning ordinances if they are adopted. As the following from the Minutes of the September 13th meeting of City Council illustrate, their move on the ordinances was a rush job.

Councilmember White said, “I’m going to abstain from the vote and I just wanted to explain why. I don’t normally abstain, generally speaking, but I don’t have enough time to digest this and with all due respect. I recognize we sometimes have time constraints to deal with, but I’m just going to abstain without further information at this time.”

Mayor Riley said, “I can understand, I apologize for that. I was just nervous, that
if we didn’t have enough regulations in place, something might get through that we
would regret. So, it’s just to make sure we have that. “

Councilmember Hallman said, “Is there a pending permit for an indoor shooting range on Meeting Street that necessitates us voting on this tonight, versus deferring it and discussing it at the next meeting?”

Mr. Keane said, “We have the expectation that we could have one soon, so we
really prefer to get an ordinance. We can go through the ordinance if you’d like tonight, to explain it to you, if that would be helpful, if we can get first reading tonight, then we can continue to discuss it before it gets final reading. We’ll have public hearings and it will come back. But we’d like to have something pending in case we do get a permit. We could get one tomorrow.”

After the City Council had the first reading on two proposed ordinances, they were sent them to the Charleston Planning Commission for public hearings. The first ordinance would make indoor shooting ranges a permitted use but would require a conditional use permit if located within a light or heavy industrial zone. Moreover, it would impose additional conditions for indoor shooting ranges. While not mentioned in the proposed ordinance below, the article in the Post and Courier reports these conditions would be a location “at least 1,000 feet from the nearest church, city park or home.”

As can be seen in the zoning map below, this ordinance, if passed with the conditions mentioned, would preclude locating a range in Mr. Chase’s mostly vacant warehouse. 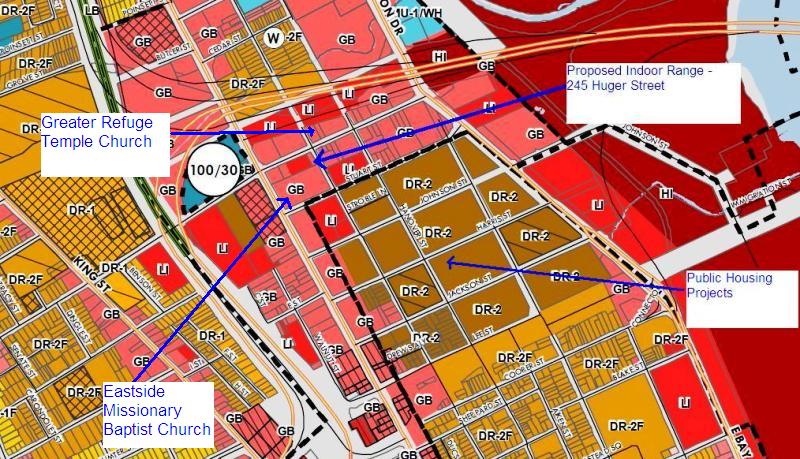 The second ordinance that passed it first reading amended the city code dealing with the discharge of firearms within the City of Charleston. It removed four current exceptions including one that allowed shooting galleries. I think it might be argued that a shooting range might qualify as a shooting gallery. It replaced these exceptions with an exception for indoor shooting ranges.

AN ORDINANCE TO AMEND SECTION 21-213 OF THE CODE OF THE CITY OF CHARLESTON TO DELETE SUBSECTIONS (1), (2), (3) AND (4) AS EXCEPTIONS TO SECTION 21-213 THAT GENERALLY PROVIDES THAT NO PERSON, EXCEPT IN CASES OF URGENT NECESSITY, SHALL DISCHARGE OR CAUSE TO BE DISCHARGED ANY FIREARM IN THE CITY, THEREBY ELIMINATING THE FOLLOWING EXCEPTIONS TO THE PROHIBITING OF THE DISCHARGING OF FIREARMS IN A SHOOTING GALLERY; (2) PURSUANT TO THE WRITTEN PERMISSION OF THE MAYOR OR PUBLIC SAFETY DIRECTOR; (3) TO THEATRICAL OR LIKE PERFORMANCES; AND (4) TO MILITARY OR SIMILAR DISPLAYS AND TO FURTHER AMEND SECTION 21-213 TO PROVIDE AN EXCEPTION FOR DISCHARGING FIREARMS IN AN INDOOR SHOOTING RANGE IN ACCORDANCE WITH LAW ON LANDS WITHIN THE CITY THAT ARE ZONED TO PERMIT SUCH USE.

In addition to Mayor Riley, opposition to the range comes from Councilman Robert Mitchell (District 4) and Councilman Jimmy Gallant III (District 5) who represent this area of Charleston. They were the ones who made the motion and second to approve the ordinances in question. Councilman Mitchell, in particular, is opposed to the proposed range. He made that quite clear according to the Minutes of the Council meeting.

Councilmember Mitchell said, “I heard about it and that’s part of the District that I and Councilman Gallant is representing, partially. I don’t think it needs to be in the Peninsula City of Charleston. I don’t believe something like that needs to be in the Peninsula City of Charleston. It’s an indoor firing range. But the problem I having it in that area with a lot of shootings, I don’t need something to be opening that up. I believe something like that can either be in the area, an industrial area like we did with the tattoo parlor, if you may. In an industrial area if you want to open something, they have one on Cross County Road, the same place I went to the shooting range, but it needs to be in an industrial area, but not in the Peninsula City. I don’t believe that.

The range that Mr. Mitchell refers to is ATP Gunshop and Range in Summerville which is located in another municipality. He was also quoted in the Post and Courier as saying another reason he opposes it is that there is “so much shooting anyway with individuals in the community.”

If one had access to a GIS system for Charleston, it would be quite interesting to see if any areas exist within the city that are not within 1,000 feet of a house, a church, or a city park. If this restriction amounts to a virtual ban on indoor ranges within Charleston, I think Mayor Riley and Charleston City Council would be on dubious legal ground. The City of Chicago found this out when their ban on target ranges was ruled void by the 7th Circuit in Ezell v. Chicago. In that decision, the court held that “the right to maintain proficiency in firearm use (is) an important corollary to the meaningful exercise of the core right to possess firearms for self‐defense.” While Ezell was decided in the 7th Circuit and Charleston is located within the 4th Circuit, judges look to other circuits for guidance. Mr. Chase had made it very clear that if he is precluded by the new zoning ordinances from opening his range, he will go to court. It could get expensive for the taxpayers of the City of Charleston.

6 thoughts on “Is Charleston Looking To Chicago For Inspiration On Target Ranges?”