The favorite epithet that the Coalition to Stop Gun Violence (sic) and their leaders love to throw at gunnies is “insurrectionist”. It doesn’t matter which end of the political spectrum you are on, if you believe the Second Amendment guarantees an individual right to keep and bear arms then you are labeled an “insurrectionist”.

Imagine their consternation to see that the number two book on the Top 100 Free Kindle books is none other than Matthew Bracken’s Enemies Foreign and Domestic. That is because in their worldview this is one of the classic insurrectionist novels for its portrayal of an out-of-control ATF and the armed response from Ranya Bardiwell, Brad Fallon, and friends. It ranks right up there with John Ross’ Unintended Consequences as subversive literature in their narrow-minded opinion. 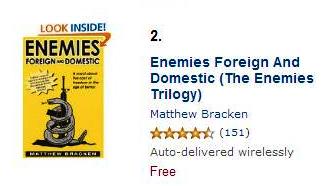 Matthew Bracken is making this book available for free in Kindle format until March 5th. Frankly, he is hoping the attention given the book will start a discussion and has penned an essay called “Gangster Government, and Sakarov’s Immunity” that should serve as a basis for discussion. I would suggest downloading that as well.

I have all three books in Bracken’s EFAD triology and I paid full price. You can get the first volume for free if you go to Amazon.com and download it. Here is the link to make it even easier.

I’ve been re-reading it today and I had forgotten how engrossing the book really is. It will keep you hooked. Now pass on the link to friends and family and encourage them to download it so we can continue irritating Josh, Ladd, and others of their ilk.