The US Army is taking a two-pronged approach to upgrading and ultimately replacing their current M4 carbine. As seen in the slide below, one prong is to update the current M4 with a heavier barrel, full auto trigger assembly, and an ambidextrous fire control assembly. Concurrently, the Army is also in the process of deciding on an eventual replacement for the M4 carbine. 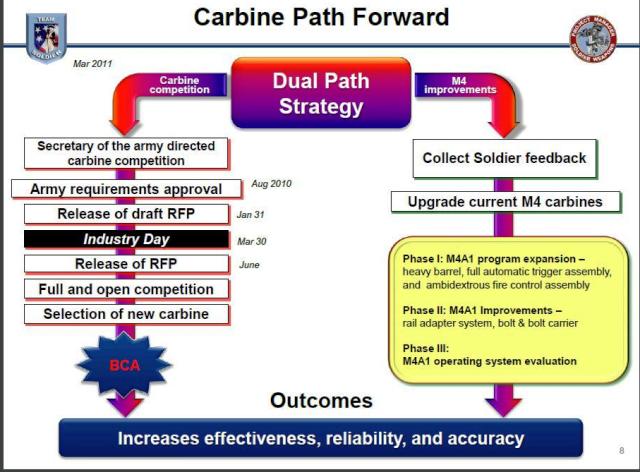 The Army has just finished the first phase of the Individual Carbine competition. In the first phase, they evaluated the vendors who had expressed interest in competing on their production capacity. In other words, the Army weeded out those companies it felt could not deliver the goods.

According to a story in Military.com, the Army has started to send out letters to those manufacturers who will be invited to participate in Phase II.

Colt Defense LLC, Heckler & Koch, Remington Arms Company and Adcor Defense Inc., received letters from the Army telling them they have been selected to move on to Phase II of the IC.

FNH USA had not yet responded to Military.com as to whether it remains in the competition.

Army officials confirmed that Phase II letters have been sent out, but said that federal acquisition guidelines prevent the service from commenting on how many companies will advance to Phase II and which firms did not make the cut.

Phase II is scheduled to last into the 1st Quarter of 2013 and will involved the testing of prototype carbines submitted by the winners. Military.com notes that testing will involve “the shooting of hundreds of thousands of rounds through the test weapons to assess accuracy, reliability and durability.” At the end of this phase, three vendors will be selected to go forward.