Crimson Trace has just released their Lightguard weapon-mounted light for 1911s that don’t have accessory rails. At this time, it is only for 1911s from either Kimber or Smith & Wesson. 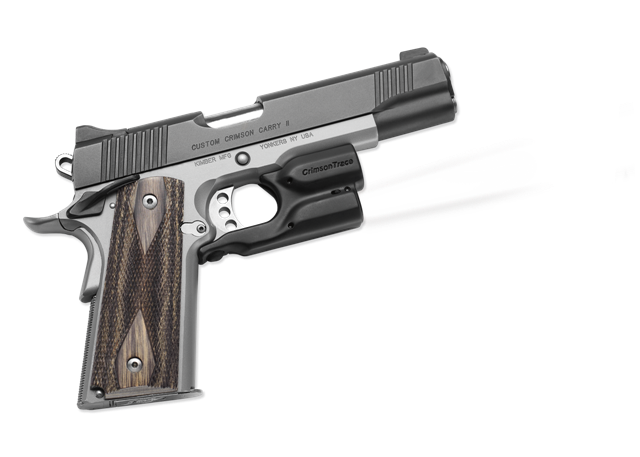 Here are the details from Crimson Trace:

Crimson Trace today announced the release of their eagerly-anticipated addition to their Lightguard™ platform for Kimber and S&W 1911 pattern pistols. The new weapon mounted light features an incredible 130 lumen output and the patented instinctive activation that made Crimson Trace the industry leader in laser sighting systems – simply hold the pistol in a normal firing grip to activate the light, with no additional buttons or switches to press. Available through their regular dealer network or from crimsontrace.com, the unit will retail at an MSRP of $199.

Whereas previously, 1911 owners would have required the services of a gunsmith to install a light on their non-railed pistols, the new 1911 Lightguard requires no gunsmithing and fits seamlessly over the trigger guard for snag-free operation. Operating on one, easily sourced CR2 lithium battery (included), the unit boasts an impressive 2 hour run time. With its narrow profile the Lightguard extends no wider than the slide, or longer than the dust cover on compact guns, holstering is a non-issue.

“Although the 1911 is justifiably the most popular handgun in the USA, it’s always lacked the ability to easily mount a light and, if you did, the options were large, encumbering choices that detract from both the function and look that 1911 fans crave,” said Kent Thomas, Director of Marketing for Crimson Trace. “Now, 1911 owners can take advantage of this life-saving self defense tool without permanently altering their guns in a slim, intelligent and highly functional way that befits the classic and trusted 1911 frame.” As an added bonus, the engineers at Crimson Trace designed the Lightguard to be fully compatible with their existing Lasergrips® including the hugely popular Master Series™ line.

5 thoughts on “Lightguard Now Available For The 1911”