Russ at LuckyGunner.com recently sent me two boxes of PMC Gold Starfire ammo to test out. I finally had a chance to give it a test yesterday afternoon. 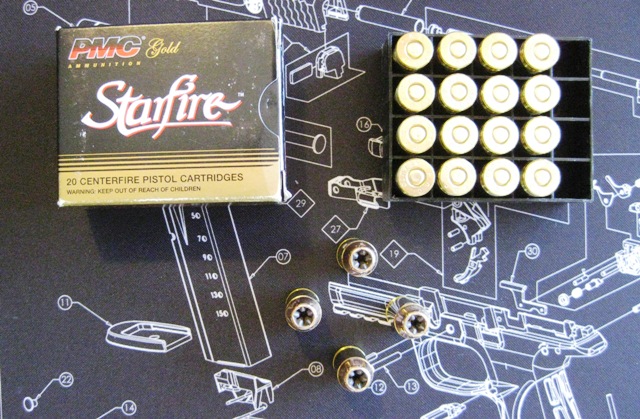 PMC Gold Starfire is made by Poongsan Corporation in Seoul, South Korea. The Starfire bullet was designed for PMC Ammunition by Tom Burczynski who is also the designer of other self-defense hollowpoint bullets such as the Federal Hydra-Shock and HS2, the Quik-Shock, and the Expanding Full Metal Jacket bullet.

The ammo I tested was the PMC Gold Starfire 230-grain .45 ACP with the Starfire bullet. According to the manufacturers specs, it has a muzzle velocity of 850 ft/sec. and generates 369 foot-pounds of energy.

As I don’t have access to a chronograph I couldn’t test the above specs nor could I test how it performs on penetration tests. However, I did test the ammo for how well it shot and how well it fed. The latter is, in my opinion, a critical test for any carry ammo.

Before I tested the PMC Gold Starfire ammo, I ran a full magazine of .45 230-grain ball ammo through each of the test guns to make sure they all were feeding properly. I had no failure to feeds in any of the test pistols. The magazines used were all factory original magazines.

My first test was to attempt to fire a full magazine through each pistol to see how it fed the PMC Gold Starfire ammo. I put two full mags through both the SR1911 and the Colt LW Commander with no failures to feed. However, I could not get the ammo to feed in the Para CCO for love or money.

Was this the ammo’s fault? The answer is, of course, an unequivocal no. It has more to do with angle of the feed ramp of the Para CCO than anything else. I haven’t tried other hollow-point ammo in this particular pistol and I didn’t have any with me to see if it would work. The advice to test a few boxes of your intended carry ammo before actually carrying it is good advice.

My second test was to see how the ammo shot. This is probably not too valid a test as I wasn’t shooting from a rest. Moreover, I haven’t been shooting in at least a month or so. Shooting is a perishable skill and my results prove it. My groups suck. That said, they are all center mass. 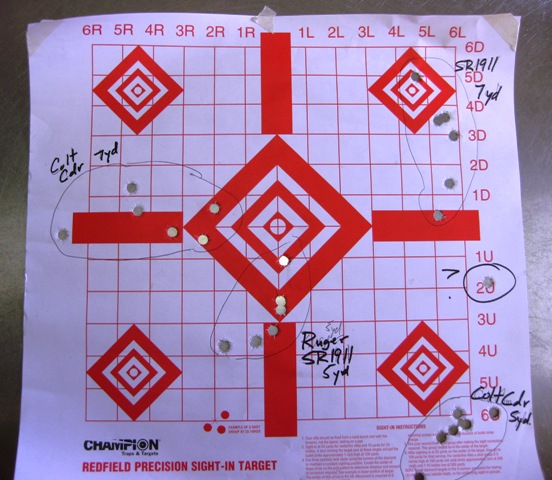 I shot six rounds from both the Ruger SR1911 and Colt LW Commander at 5 and 7 yards respectively. I did have one failure to feed in the Colt but no further troubles after I cleared it. I shot a total of 40 rounds of the PMC Gold Starfire and had no duds in the bunch. The felt recoil seemed to be consistent throughout. Checking my brass I didn’t see any bulged primers or any other indication of excess pressure.

The cost of the PMC Gold Starfire ammo is $17 for a box of 20. This compares quite favorably to other self-defense ammo such as Hornady’s Critical Defense, Remington’s Golden Saber, Speer’s Gold-Dot, and, of course, the Federal Hydra-Shock with its Tom Burczynski designed bullet.

Would I use this ammo as an everyday self-defense carry load? The answer is maybe. The bullet is a solid design and the cost is definitely right. As my experience with the failure to feed in the Para CCO makes clear, I’d have to test the round in whatever gun I was carrying but one should do that anyway.

One of the things holding me back from a definite yes is that PMC is not a member of SAAMI – the Small Arms and Ammunition Manufacturers Institute. The advice that is often given to not carry handloaded ammo due to overzealous prosecutors and ambulance chasing lawyers has been expanded in some quarters to include the advice to only carry rounds manufactured by SAAMI members. The thinking is that ammunition from SAAMI members is more likely to conform to their specs and that the load will be consistent from batch to batch. Whether this is a valid concern or not, I’ll leave up to you.