Cathy Malloy, wife of Gov. Dan Malloy (D-CT) and First Lady of Connecticut, engaged in a rant against the media on Wednesday. She was speaking at a Democratic National Convention event sponsored by Emily’s List along with Ashley Judd and Sen. Kirsten Gillibrand (D-NY) where her remarks were heard and recorded by a reporter for the Albany Times-Union.

Malloy’s rant was about the intrusiveness of the media into public officials’ private lives. To which I would normally agree, at least in part. However, she went on to add the following:

“In April I drove to work and I forgot to put my seat belt on, and I was pulled over by police. Of course, they had no idea who I was because I drive this really shitty car, and they didn’t believe that I was the governor’s wife in this shitty car. And I was driving myself, because of course, governor’s wives only get security when we’re with our husbands. We’re pretty second-class without them.”

Shitty car or brand new BMW/Audi/Mercedes, why should it matter to a cop stopping you for breaking a traffic law that you were the governor’s wife? It couldn’t have been been because you were trying to weasel your way out of a ticket by using your husband’s position, would it? Hmm.

To assist Connecticut cops if they happen to stop the First Lady of Connecticut again and fail to recognize Mrs. Malloy, her picture is below. 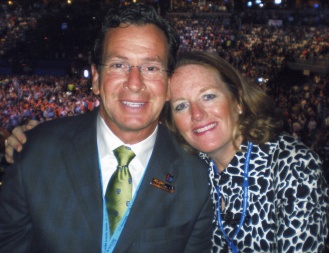