Grass Roots North Carolina, the state’s more aggressive gun rights organization, usually has a booth at all the major gun shows across the state. These booths – like the organization itself – are staffed by volunteers. Knowing the election was coming up and with the Complementary Spouse out of town taking care of family matters, I thought helping out at the Asheville Gun & Knife Show would be an ideal way to spend a few hours. 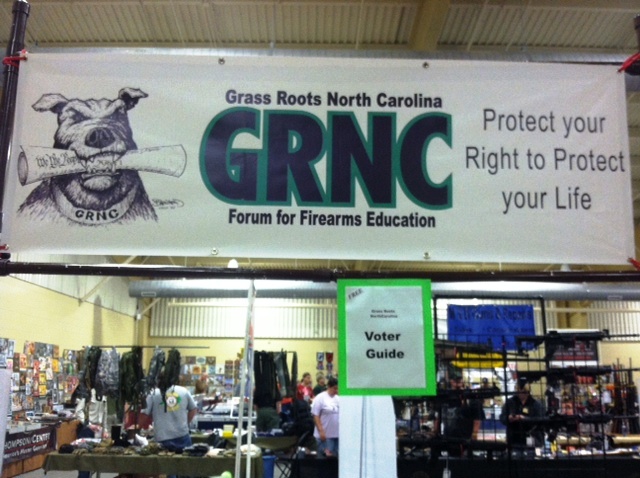 Our job was to introduce people to GRNC, hand out voter guides, and hopefully sign up new members. While the show opened at 10am, it took a while for people to start showing up. I’m guessing a lot of folks either went on Saturday or they were at church.

John Hammond, who coordinates these efforts in the mountains for GRNC, told me that he had handed out over 300 voter guides on Saturday. He also told me that the Republican nominee for the 11th Congressional District, Mark Meadows, had visited the booth yesterday along with Rep. Joe “You Lie!” Wilson (R-SC) and the 2010 Republican nominee Jeff Miller of Hendersonville.

In the three hours that I worked the booth, I’d estimate we spoke with 50-75 people. Some were already members, some had never heard of GRNC, and some were interested in joining in the future. After running into 3-4 people who said they were not registered to vote, we started asking people if they were registered to vote before giving out a voter guide. Those that were registered were genuinely interested in the voter guide. I stressed that we were non-partisan and that in some cases the Democrat actually was ranked better than the Republican.

I have to admit that I was somewhat dumbfounded that we ran into that many unregistered voters. I guess I shouldn’t be but with the ease of registration nowadays it makes it hard to say you didn’t have an opportunity. We never pressed it as we thought the deadline for registration was this past Friday (30 day before the election). However, checking the State Board of Elections website, I found that the deadline will actually be this Friday, October 12th. Given this, it would have been a good idea for GRNC, the NRA, or another gun rights organization to have had a voter registrar available to register these potential voters.

All in all, I had a good time. Of course, since I was already at the show, I had to do a little shopping. I came home with some Greek 30-06 ammo in en bloc clips, a couple of AK magazines, and a smattering of other stuff but no new guns.

12 thoughts on “What I Did This Morning”