Headlines can be misleading. You might think it means one thing and the author meant something entirely different. A prime example would be this headline which most definitely qualifies for the misleading headline of the day award. 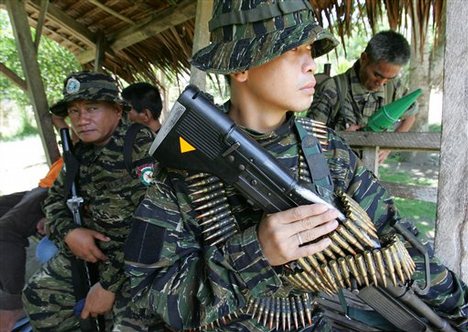 WTF?! Those aren’t MILFs. Actually they are. They are from the Moro Islamic Liberation Front which is fighting in the southern Philippines.
From the article:

SULTAN KUDARAT, Philippines – After watching two of his brothers die
during four decades of fighting in the southern Philippines, Muslim
rebel Abdulhamid Ganalan feels a planned peace deal could be surrender.

“I will not agree. That is like full surrender,” Ganalan told AFP
from inside Camp Darapanan, the MILF’s administrative headquarters, when
asked whether he would lay down his weapons as part of a peace accord.

The moral of the story is that headlines can be misleading and that fantasies are just that – fantasies.

3 thoughts on “Misleading Headline Of The Day”