A group called MurderedMexicans.org is sponsoring a billboard that asks “Who cares about a few hundred” murdered Mexicans. I don’t know if they have other billboards up but the one below is in Clovis, New Mexico on S. Prince Street. This picture comes from a post on CleanUpATF.org. 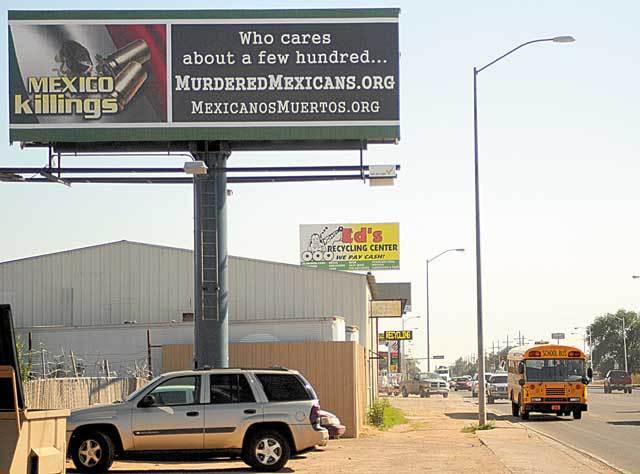 This website along with its Spanish language version lays out the details of Operation Fast and Furious. It urges people to call their Congressman but especially those on the House Oversight and Government Reform Committee. It says to thank those asking the tough questions of ATF and the Justice Department and to ask those defending Attorney General Eric Holder “why they are defending such a despicable person”.

Not having heard of this group, I checked Network Solutions and their Whois tool and found that the website was registered in March of 2012 to Charles Abernathy.

An Internet search turns up a story from the Portales News-Tribune about Abernathy and the billboard.

Charles Abernathy, 47, said the website is a grassroots effort to
hold those responsible for the Fast and Furious fiasco, in which a
border patrol official was killed.


He said the “murdered Mexicans” refers to the hundreds who were killed by weapons supplied to Mexican Drug Cartel leaders through a Bureau of Alcohol, Tobacco and
Firearms sting.


Abernathy said he chose the words for their shock value.


“I’m sure some people are offended,” said Abernathy, an oil field truck
driver from Houston. “I think if they use that and end up doing research
over the issues. …. This is what I’m trying to accomplish; people
don’t know about this and now they do.”

The story points out that some in Clovis were offended by the billboard until they went to the website. They do wish he’d chosen his wording a little differently. Abernathy is also paying for digital billboards in Odessa and Lubbock, Texas. He says it is a grassroots effort and he is paying for it out of his own pocket.

More power to people like Charles Abernathy who put their money behind their convictions.