I took advantage of North Carolina’s early voting this afternoon. Today was the third day it has been available in the state. Turnout was very heavy according to the poll workers to whom I spoke. They estimate they had 1,600 voters in the first two days and they were thinking today would be just as heavy if not heavier. And this is one of two locations where voters can cast ballots in the Early One-Stop Absentee voting period.

Haywood County is a small to mid-size county with about 60,000 residents. According to the most recent NC State Board of Elections report, there are 42,383 voters in the county. Of this, 19,333 are Democrats, 12,321 are Republicans, and 10,650 are unaffiliated (or what would be called Independents elsewhere). It is also one of the least ethnically diverse counties in the state. The electorate is over 97% white with the remaining 3% spread amongst blacks, Hispanics, Asians, American Indians, multi-racial, and “other.” 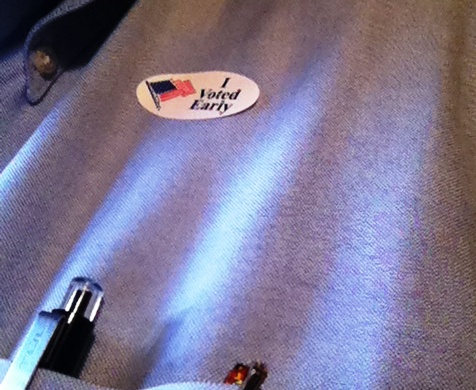 Assuming the other polling location in Canton was not quite as busy, I’d estimate approximately 4,300 people have already voted in the county. This is 10% of the eligible voters in just 3 days of early voting.

I have never seen lines like this for early voting. My location had 10 machines which were all in use, a line of about 15 that had been checked in, and about another 5 to 10 in line waiting to get checked in. The poll workers I spoke with said they had lines waiting to get in at 8:30am this morning and that the numbers were just a little bit lighter when I got there. The age of the voters from what I saw tended to cluster in middle-age which, as much as I hate to admit it, would include me.

I take this turnout as a good sign for Mitt Romney and the rest of the Republican ticket in North Carolina. I most certainly could be wrong but I don’t think so. The county went for McCain in 2008 and I have no doubts that it will go for Romney this time.

2 thoughts on “A Report On Early Voting”