In yesterday’s presidential debate on foreign policy issues, Barack Obama said in response to Mitt Romney’s criticism of the downsized Navy being smaller than the 1916 US Navy, “”You mentioned the Navy, for example, and that we have fewer ships than we did in 1916. Well, Governor, we also have fewer horses and bayonets, because the nature of our military’s changed.”

I don’t think any of the president’s handlers ever bothered to inform him of the US Marine Corps Mountain Warfare Training Center in Pickel Meadow, California. Established in 1951 to help train Marines for the cold weather conditions that they would have to fight in during the Korean War, the MWTC provides training in fighting in high altitude and cold weather conditions. The training it provides is being put to use daily in the “good war” in Afghanistan.

One of the more interesting courses that the MWTC provides is one on animal packing. It trains Marines as well as soldiers and airmen in the use of pack animals to deliver supplies and carry heavier equipment.

The MilitaryTimes just had a story on the pack animal training course a few days ago. They noted that the course had been taught for almost 30 years. The course lasts for two weeks and teaches the students how to pack and handle the animals in the mountainous terrain.

An official USMC public affairs story says of the training:

As the Marine Corps tries to solve the challenges of getting provisions to Marines in hard to reach battle spaces, they do not always look toward technology but rather apply solutions that were effective in the past.

The Animal Packers Course started as a concept course at the Marine Corps Mountain Warfare Training Center Bridgeport, Calif., in 1983.

The course is still taught today after nearly 30 years, but the United States had been using this technique since the early 1980s.

“It’s been around since both World Wars and the last time they were utilized was in Korea,” said Sgt. Justin Head, staff noncommissioned officer in charge, Animal Packers Program. “It’s been around for thousands of years. It’s something that’s worked for countless militaries.”

The 16-day course teaches Marines how to use animals in the region they find themselves in as a logistical tool to transport weapons, ammunition, food, supplies or wounded Marines through areas vehicles cannot reach.

“After coming through the course and learning the basic fundamentals they can pack any kind of animal, from llama, camel, anything,” Head said. “If you’re going to fight compartmentalized conventional war in the mountains, you’ve got to utilize animals. If you don’t, you’re not going to be able to get your logistics, your ammo, basically the five Bs, to your Marines.”

If you know anything about mules, you know they are a cross between the symbol of the Democrat Party – the donkey – and a horse. More specifically, between a jackass and a mare or female horse. While the nature of the military has changed, some aspects of warfighting haven’t changed. Too bad Obama didn’t realize that when he made his snarky, jackass of a comment last night. 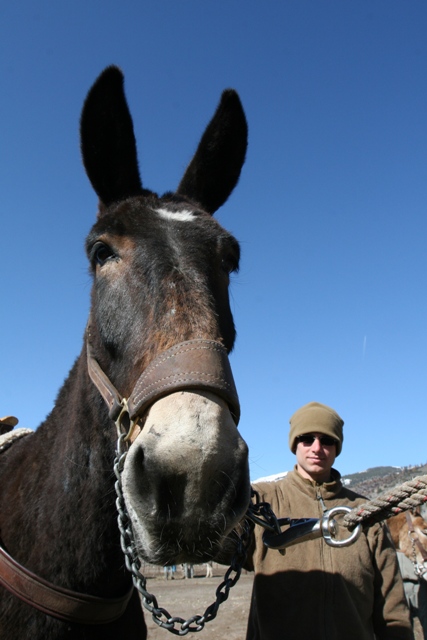 7 thoughts on “Does Obama Know About This Place?”