There are times that I think that Josh Horwitz of the Coalition to Stop Gun Violence (sic) gets his ideas from outerspace and there are times I think he channels his inner Maoist student revolutionary. Today it appears he is looking to Chairman Mao and the Great Proletarian Cultural Revolution for his inspiration. 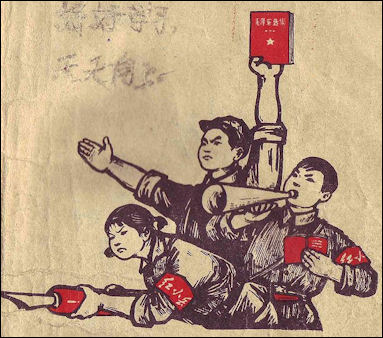 Today, in his column in Huffington Post, he attacked not only Kurt Hofmann but those gun bloggers who have stood with him.


It would be tempting to dismiss Hofmann as an aberration — an isolated extremist with little ability to inspire actual acts of violence — except for two important factors. The first is that Hofmann’s disturbing call to use IEDs against American service members has been defended by a broad swath of the pro-gun movement. This includes statements of support from “The War on Guns” blogger David Codrea, “No Lawyers — Only Guns and Money” blogger John Richardson, the pro-gun Calumet Foundation, “Gun Free Zone” blogger Miguel Gonzalez, “Guns Save Life” blogger John Boch, “Days of Our Trailers” blogger Roy Kubicek (AKA “Thirdpower”), “Shall Not Be Questioned” blogger/NRA election volunteer coordinator Keith Milligan (AKA “Sebastian”) and “Of Arms & the Law” blogger David Hardy, among others.

Second, and more important, is the man that Hofmann himself cites in his blog (on four separate occasions) as the inspiration behind his scheme to empower “budding militia ordnance engineers”: former Alabama militia leader Mike Vanderboegh.

The real target of Horwitz is not Kurt and not the other gun bloggers. It is Mike Vanderboegh. Horwitz devoted as much time attacking Mike and his online novel Absolved as he did the rest of us. That Horwitz feels so threatened by a middle-aged man who is in tremendously poor health is telling.

After reading the post and the comments, it is obvious to me that they hate the First Amendment as much as they do the Second Amendment. To be more precise, Josh Horwitz and his erstwhile Red Guard believe in freedom of speech for themselves but not for those who deviate from their notion of orthodoxy. Those of us who deviate must be silenced, denounced, and made to confess our sins.

The ironic thing is that during Mao’s Cultural Revolution, as the child of a physician father and a research scientist mother, it would have been Josh himself who was expelled from school and his parents made to confess their sins against the proletariat.

Josh Horwitz is just as much a totalitarian thug as the rest of his minions at CSGV. No amount of education at “the better schools” will ever change that.

UPDATE: Joe Huffman is upset that he wasn’t listed among the gun bloggers by Josh Horwitz. Moreover, he does know a thing or two about blowing things up.

One thought on “The Great Proletarian Cultural Revolution And CSGV”