Demand Action to End Gun Violence (sic) is a project of Mayor Bloomberg and his Illegal Mayors. This week they have been tweeting a “breaking” message about a new 50-state “analysis of gun violence”. 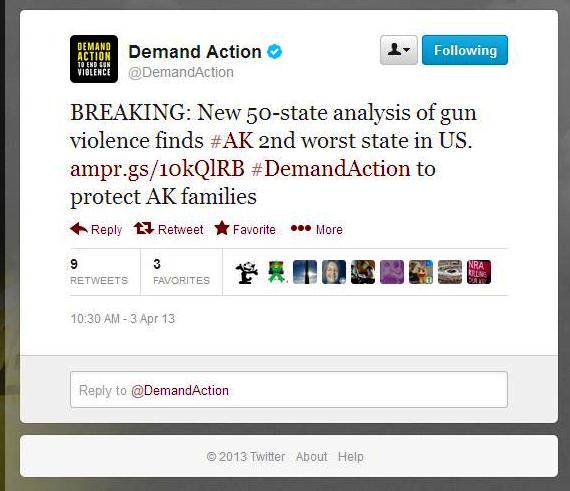 I’d like to believe that no one would be so gullible as to believe this “analysis” was unbiased and accurate. The sad reality is that this report from the Center from American Progress, a “progressive” research and advocacy group, has been picked up by a number of media outlets including MSNBC. I guess given the record of the media running with sham stories I shouldn’t be surprised.

The first indication that this is a biased report is who wrote it. The authors – Arkadi Gerney, Chelsea Parsons, and Charles Posner – all have links to either Bloomberg or Obama. Gerney preceded Mark Glaze as the executive director of Mayors Against Illegal Guns. Parsons was general counsel to the New York City
criminal justice coordinator prior to coming to the Center for American Progress. Finally, Posner worked for a Democratic polling group and Organizing for America prior to coming to CAP. To think that any of these authors would put out a report on guns that could pass the smell test is ludicrous.

The second indication that this report is a sham is the reliance on data and ranking from groups such as the Law Center to Prevent Gun Violence, the Violence Policy Center, and MAIG. While they do use some data that is valid, how they twist is not.

Finally, you need only read the “recommendations” to understand that this “analysis” was not at finding the truth but to promote advocacy for more gun control. They want universal background checks, a definition of “dangerous people” that goes far beyond felons and the mentally ill, a ban on “assault weapons and high-capacity magazines”, and stronger laws against trafficking.

This report is proof positive that the old saw that “figures lie and liars figure” is true.