Firearms manufacturers really don’t have any incentive right now to introduce new guns as they are selling everything they produce. I’m sure many of them have new designs ready to go when the market for guns appears to be slowing. Because of this, I didn’t expect to see many new guns at the recent NRA Annual Meeting. I did, however, have a couple I wanted to check out.

The first firearm that I really wanted to see and handle was the Mossberg 500 Bantam Tactical 20 gauge shotgun. It is an 8-shot 20 gauge pump with a 13″ length of pull and a ghost ring sight. I have been looking for a youth-sized shotgun for the Complementary Spouse in 20 gauge. I want her to have a self-defense shotgun.

According to the specifications from Mossberg, the Bantam Tactical (Model 54300) weighs 6 pounds, has a 3″ chamber, and has a cylinder bore. It is drilled and tapped for a scope or red dot sight if you want to add it. The MSRP on this shotgun is $485 but the rep agreed that the street price should be around $400.

I found the shotgun easy to handle, pumped smoothly, and easy to get on target. The front blade sight has a red insert which makes it easy to see. This shotgun is going on the buy list. I really liked it and it would work for either the Complementary Spouse or myself. It isn’t too short but just right.

Mossberg also makes a model (54301) with the same 8-round capacity but equipped with a pistol grip and adjustable AR-style stock. While it is more adjustable with a length of pull ranging from 10 3/4″ to 14 5/8″, it is heavier by 3/4 of a pound and the tang safety is hard to manipulate with a pistol grip. It is more “tacticool” but it just didn’t do much for me. It also lists for $121 more.

The other firearm I wanted to examine was the Zastava Mini-Mauser with the Mannlicher stock. It is imported from Zastava of Serbia by Century International Arms and is available in both .223 and 7.62×39. I thought it would be a fun rifle to have. Given that it was coming from Serbia and that it was being sold by Century, I thought it might not be too expensive.

The rifle weighs just less than 6 pounds, has a 5 round integral magazine, and has a  18.11″ barrel. The stock is made of European walnut and comes with an oiled finish. Trying it out, the trigger pull was smooth and crisp but the bolt could have used some work. From what I can find on the Internet, the street price is around $500. For that price, I’d have to think about it a lot more. I know that Ruger, Savage, and CZ also make or have made bolt action rifles in 7.62×39.

While I did check out a number of other firearms companies and saw a lot of guns that I liked, there was only one that made the buy list. That is the CZ 75 Shadow SAO. 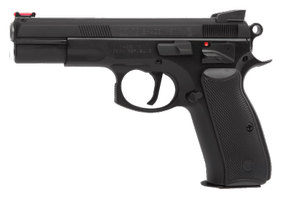 It just fit my hand right and the trigger…oh, the trigger. It is essentially a custom trigger in a production gun. I had thought of a 1911 in 9mm but I decided why not a pistol in the caliber for which it was designed.

When building the SAO (Single Action Only), focus turned to creating the
best trigger pull possible. Fitted with a redesigned unit originally
used in the CZ 75 Champion, the hammer of the SAO is slightly wider with
modified sear engagement, resulting in smoother release and more
positive ignition. The CZ single action aluminum trigger has an
overtravel adjustment screw and pulls at 3.5-3.8 lbs. To further smooth
the trigger pull and improve trigger reset distance, the CZ 85
Combat-style slide without a firing pin block is used. Lighter springs
(15 lb. recoil, 16 lb. main) create a smoother, more consistent action
and the CZ 75 SA wide ambidextrous safeties give more purchase and
better positioning of the thumb.

I’m used to the CZ 75 as I have a couple of Tanfoglio Witnesses which are clones of it. They are nice pistols but this goes to another level. The MSRP on this is $979 but I’ve found it for less. Now to start searching for one in stock.