Yesterday, the Nevada State Assembly passed universal background checks by a vote of 23 yea to 19 nay and sent it to Gov. Brian Sandoval (R-NV) for his signature or veto. The text of the bill as enrolled can be found here.

One of the most contentious bills of the day was Senate Bill 221, sponsored by Sen. Justin Jones, D-Las Vegas, to require background checks on private gun sales.

The bill appeared dead early Monday, but in an unexpected move, the Assembly Judiciary Committee approved it on a 7-5 vote.

The full Assembly then voted 23-19 to send it to Sandoval despite his promise to veto the measure. Four Democrats joined with all 15 Republicans in opposing the measure.

The bill previously passed the Senate on an 11-10 party-line vote with Democrats in support.

Multiple reports indicate that Gov. Sandoval will veto this bill. That has not stopped Mayor Bloomberg’s Illegal Mayors from running ads asking people to call the governor and asking him to sign it. Moreover, they are saying that “86% of Nevada voters” support the bill.

The other day I wrote about how certain legislators were expecting substantial campaign contributions as a result of pushing Bloomberg’s bill.

It is obvious from the lists below, that Bloomberg saturated Carson City with lobbyists. There are a total of 63 legislators in both houses of the Nevada Legislature. Examining the list of lobbyists below for Mayor Bloomberg’s Illegal Mayors, I see a total of 13 paid lobbyists or one lobbyist for every 4.85 legislators. An asterisk after the lobbyist name indicates that he or she is a paid lobbyist. Bloomberg had no volunteer lobbyists. 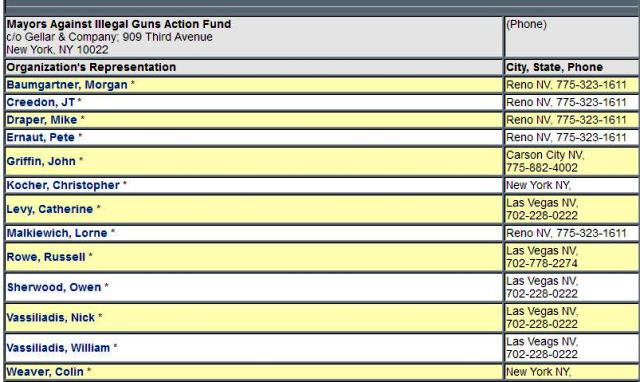 From an outsider’s perspective, it appears that Mayor Bloomberg overwhelmed the grassroots organizations with money, ads, and paid lobbyists just like he did in Colorado. Unlike Colorado, having a Republican governor may be enough to stop this in its tracks. A veto of the bill cannot be overriden by either house of the Nevada Legislature.

While it is past time to have made your voice heard, we still have a chance with Gov. Sandoval. I’d emphasize that this measure won’t stop crime and would not have prevented the Newtown shootings. Moreover, if you are not a state resident but have visited Reno, Las Vegas, or other gambling locations, make that known along with your determination not to spend your money in a state that doesn’t believe in your civil rights.

One final reminder: be firm but respectful.