Mayor Larry Morrissey of Rockford, Illinois was a member of Mayor Bloomberg’s Illegal Mayors in good standing. Even this morning their website showed him as a member of their “coalition” as you can see in the screenshot below. 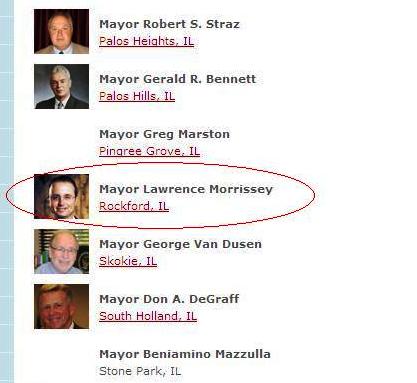 I say “was a member” because Mayor Morrissey not only dropped out of MAIG yesterday but has indicated that he will be seeking a concealed carry permit as soon as it finally becomes law in the state of Illinois. His decision to seek a concealed carry permit is due to his receiving death threats in office for which the Rockford PD provided him extra protection.

As he told the Rockford Register Star, “I don’t want to put my family’s life at risk or my own life at risk if I can otherwise protect myself.”

Regarding his decision to quit Mayor Bloomberg’s Illegal Mayors, he had this to say:

“The reason why I joined the group in the first place was because I took the name for what it said, against illegal guns,” Morrissey said.

Morrissey said he didn’t expect the organization to get involved with banning magazine clips or “assault” weapons.

“As the original mission swayed, that’s when I decided it was no longer in line with my beliefs,” Morrissey said.

You have to wonder how many other mayors across the country were sold the line that all MAIG wanted to do was prevent criminals from having firearms as opposed to preventing everyone but Mayor Bloomberg’s personal protection team from having firearms.

In the meantime, Mayor Morrissey should be congratulated on the wisdom of his decision to not only distance himself from MAIG but to step and provide the protection himself for he and his family. If you want to congratulate him, contact information is found here.