I stumbled across some interesting history this morning. It turns out that the planned Ruger firearms factory in Mayodan will not be the first arms factory in Rockingham County. That honor goes to a factory owned by Alexander Searcy and Dr. J. S. Moore which made rifles for the Confederate Army in 1862-63. 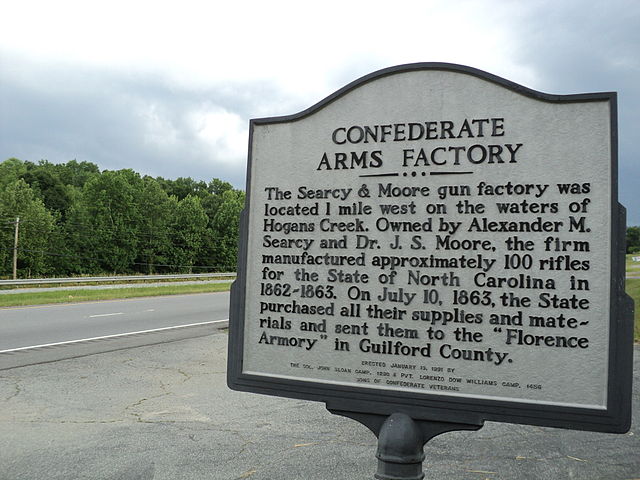 Hogan’s Creek is located in western Rockingham County south of the towns of Madison and Mayodan.

The Searcy & Moore factory and all its equipment was purchased by the State of North Carolina in 1863 and transferred to the North Carolina Armory at Florence. This armory was started at the beginning of the war in the village of Florence which is just north of present day Jamestown. From the newsletter of the Sons of Confederate Veterans,  Frazier Camp:

The armory was still operating after the various contractors had gone out of business and assembled many guns from parts from these and other sources. One example of this was in July1863 when the State purchased all of the materials of Searcy & Moore (located at Rocky Springs in Rockingham County) and sent them to the Florence Armory. Henry Clay Briggs wrote that his father worked in the government gun shop at Florence for six months and that he made springs and triggers. This was the only military arms manufactory still operating in this area in April 1865 and was burned by Yankee raiders.

I’m sure when the Ruger plant is up and running it will make more firearms in one day than the Searcy & Moore factory did in a year. Still, I find the history of this small arms maker interesting.