The Russian cruise ship Lyubov Orlova is now drifting around the North Atlantic crewed only by thousands of cannibal rats. It is thought to be heading towards the United Kingdom and Ireland. 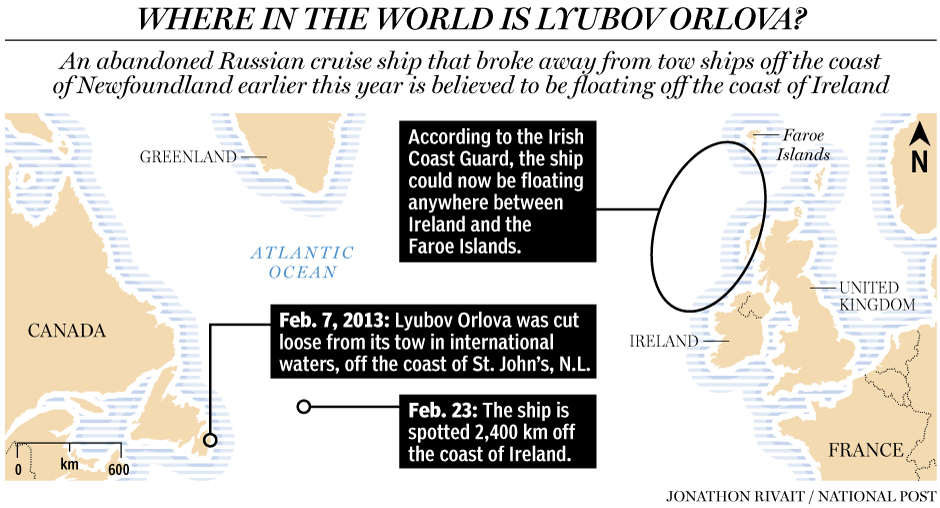 The cruise ship was impounded in the Canadian province of Newfoundland back in 2010 over unpaid debts. Eventually the crew and passengers were sent home to Russia and the ship was to be towed to the Dominican Republic to be scrapped.


The Belfast Telegraph reports that after the tug towing the Lyubov Orlova broke its towing hawser, Transport Canada sent another boat to tow it out to sea and abandon it.

Sending the ship off into international waters, Transport Canada said it was satisfied the Lyubov Orlova “no longer poses a threat to the safety of [Canadian] offshore oil installations, their personnel or the marine environment”.

Since then the ship has been drifting and its location seems unknown despite satellite photos and search planes. Salvage hunters are anxious to find the ship for it as it has a scrap value of somewhere around $1 million. That said, the rats are a concern as is its eventual landfall. The Irish are calling it a biohazard and are angry at the Canadians for just letting it drift towards them.

The chief of the Irish Coast Guard is expressing frustration with Canadian authorities for their February decision to send a derelict, rat-infested “biohazard” bobbing toward the Emerald Isle.

“It was over 10 days from when it went missing to when we were told about it,” Irish Coast Guard director Chris Reynolds told the Irish Independent this week. “We would have been much happier if they told us much earlier.”

“We could have sank it or towed it in for salvage.”…

That, and untold swarms of rats. Before its ill-advised tow into the North Atlantic, the Lyubov Orlova spent two years tied up in St. John’s harbour, virtually guaranteeing its status as a floating rat colony.

Or, as Mr. Reynolds called it, a “biohazard.”

“We don’t want rats from foreign ships coming onto Irish soil. If it came and broke up on shore, I’m sure local people wouldn’t be very happy about it,” Mr. Reynolds told the Irish Independent.

A much greater danger than Newfoundland rats, however, is the prospect of the Lyubov Orlova looming out of the fog and obliterating an Irish freighter or fishing vessel.

“For us, the big danger is something hitting it,” Mr. Reynolds told the BBC. “It can bump into something, or more likely, something can bump into it in the middle of the night in the Atlantic.”

I don’t know about you but I find a ghost ship filled with cannibal rats much more scary than an unserialized hunk of aluminum. Or as the Brits and Irish would say, aluminium.