A stock investing website, The Wall Street Cheat Sheet, had an article yesterday discussing the financial results for Ruger. The author of the article was looking at the impact of proposed gun control laws on gun sales.

The law of unintended consequences is hitting its mark with politicians and gun owners. Amid a push for tighter gun control laws over the past year, an increase in firearm sales is boosting the nation’s leading gun manufacturer.

The article concluded that the big push for gun control post-Newtown was a big factor in the growth of gun sales.

The graphic below is from a presentation that Smith and Wesson made to stock analysts. It plots the monthly NICS checks for each calendar year from 2008 to the present. 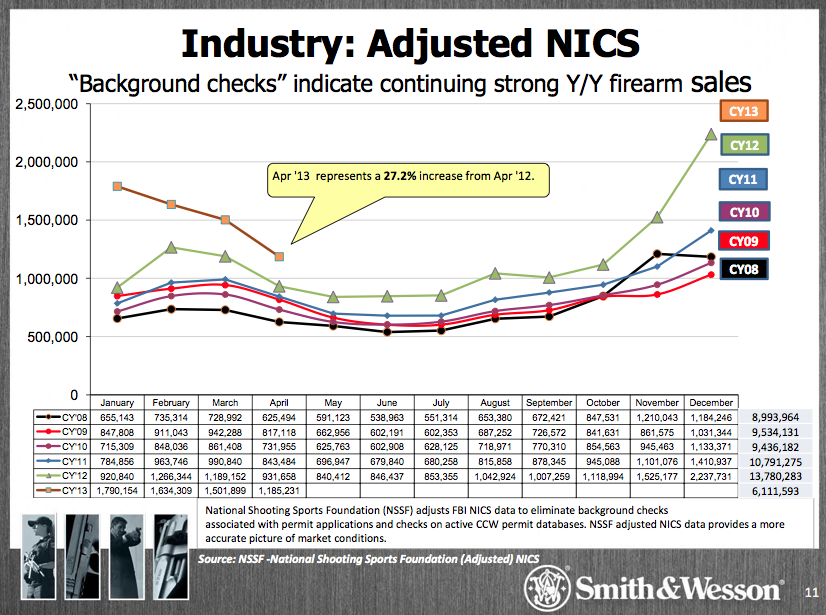 And then there is this:

According to an analysis of the gun industry by the Associated Press, the federal government has conducted roughly the same number of background checks for gun owners and prospective buyers under Obama’s first term, as it did under George W. Bush’s first six years of presidency. For the first time since 1993, the number of federally licensed retail gun dealers in the U.S. increased in 2010 and 2011, adding 1,167 more licensed dealers.

I guess Obama really is the world’s best gun salesman.