The CalGuns Foundation has released the infographic below that show the end result of the Handgun Roster and the microstamping requirement in California. The end result is no handguns available which would please the gun prohibitionists no end. Moreover, they will say they didn’t outlaw these guns but merely demanded that they be safe. It is the “fault” they will say of a firearms industry that didn’t care about either their customer’s safety or of being able to “assist” police supposedly solve crimes through microstamps. 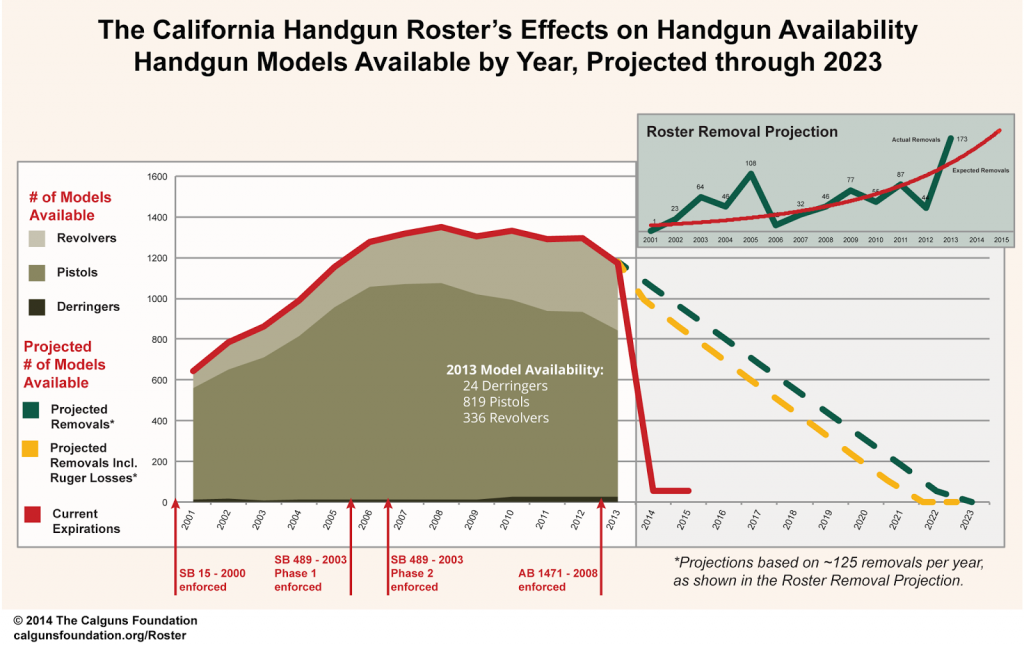 CalGuns has put together an abbreviated history of the Handgun Roster as well as the microstamping requirement. For even more info on the Roster, go here.


4/30/2009: During a short period of time in which the United States Constitution’s Second Amendment applied to states and local governments within the federal Ninth Circuit through a case called Nordyke v. King, The Calguns Foundation and 5 other plaintiffs — including the Second Amendment Foundation — filed a federal civil rights lawsuit called Peña v. Cid (now Peña v. Lindley) against the California Department of Justice that challenged the constitutionality of the state’s “Handgun Roster” laws. The Peña case, helmed by civil rights attorneys Alan Gura, Donald Kilmer, and Jason Davis, was argued at the trial court on December 17, 2013, on cross motions for summary judgment and is currently pending decision.

It also appears that Ruger is sick and tired of kowtowing to the California rules and will let their semi-auto pistols drop off the California Handgun Roster. Given that a significant portion of Ruger’s sales growth comes from new introductions and given that new pistols must be microstamped under California law, I frankly don’t blame Ruger. I see it as a reasonable business decision on their part.

In perhaps one of the more shocking discoveries at the 2014 SHOT Show, Ruger spokesperson Kevin Reid revealed that Ruger was going to let it’s entire California Semiautomatic pistol roster “…drop off…” the CA Department of Justice Approved Handgun List.

It seems that in Ruger’s slavish dedication to the concept of “continuous improvement”, and that California is milking some $ 200 per pistol per year to stay on the list AND that microstamping is now the rule, Ruger has already let some 60+ semiautomatic pistols drop off the approved handgun roster with the rest shortly to follow. (Note to the legal beagles out there: NSSF Governmental Relations/State Affairs Director Jake McGuigan did announce at an early morning seminar that NSSF had filed suit on or around January 9 regarding the microstamping issue in California.).

How this effects Ruger Sales of revolvers and rifles in the Fool’s Paradise of Kalifornia remains to be seen. While Ruger continues to produce excellent revolvers, California gun owners are notorious for voting with their feet against businesses that desert them when the chips are down. Hopefully this won’t too badly effect the roll-out of the latest GP-100.