On Thursday, Senior US District Court Judge Albert V. Covello ruled that despite being “in common use” the State of Connecticut could impose an assault weapons (sic) and magazine ban. This ban had been challenged by the Connecticut Citizens Defense League in the case of Shew et al v. Malloy et al. Today the CCDL announced that a formal notice of an intention to appeal had been filed.

HARTFORD – Just one day after receiving an adverse ruling from the lower federal court on their
Second Amendment challenge to Connecticut’s new firearms law,
the plaintiff-firearms owners and organizations filed a formal notice of their intention to appeal the ruling. In addition to following the U.S. Supreme Court precedents in the renowned cases of
Heller
and
MacDonald,
the lower federal court deciding the case was bound to follow recent precedents of the U.S. Second Circuit Court of Appeals in New York. To date, the Second Circuit has upheld laws that place greater restrictions on the right to bear arms than have courts in federal circuits in other parts of the country. It is these diverging views of the Second Amendment on issues that were not resolved by the U.S. Supreme Court in
Heller
and
MacDonald
that make it likely that the Supreme Court will decide to hear one or more Second Amendment cases in the next few years.


Although the legal conclusions did not go their way at this initial stage of the litigation, the lower court did make factual findings that gun owners view as favorable. For example, the court found that certain of the newly banned firearms, such as the popular AR-15, are in
“
common use
”
for lawful purposes throughout the nation. The AR-15 type modern sporting rifle, which is newly classified as an
“
assault weapon
”
under the legislation, is the leading type of firearm used in national shooting matches and in other competitions sponsored by the congressionally established Civilian Marksmanship Program. The court also
found that banning such commonly used firearms places a “substantial burden” on fundamental Second
Amendment rights.

The photo below was posted on their blog announcing that they planned to appeal the decision. I think they have it right. 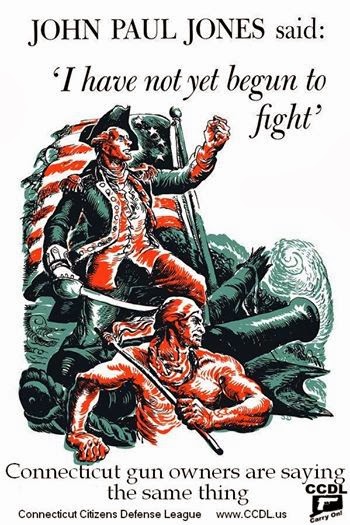 2 thoughts on “Shew V. Malloy Will Be Appealed”