Long before biathlon competitors used .22 rifles with exotic stocks made by Anschutz or Izhmash and with bolt assemblies reminiscent of Formula One shifters, there were Mausers, Mosin-Nagants, and Winchester Model 70s. Indeed the first Olympic biathlon held in 1924 in Chamonix, France was called “military patrol”.

Olympic biathlon competition as a medal sport would return until the 1960 Squaw Valley Olympic Games. The competitors in these games would also use bolt action rifles in center-fire calibers. They would fire 20 shots – 5 each at 200m, 250m, 150m, and 100m – with the first three series being fired prone with the last series being fired standing. Indeed, it wasn’t until 1978 that the governing body changed the course of fire to 50m with a .22 LR rifle. The 1980 Lake Placid Olympics were the first to feature the new rules.

The military is where many of the competitors got their start. The US Army had the Modern Winter Biathlon Training Center at Ft. Richardson, Alaska and the early US teams were filled with men who had trained there in the Army. Even today, the US Army National Guard maintains a biathlon training center at Camp Ethan Allen

So it should not be surprising that many of the biathlon rifles from the earlier era were derived from the standard military rifles of the various countries. Given the history of winter warfare and ski troops in Scandinavia and the former Soviet Union these rifles are concentrated in those countries. The American competitors, by contrast, are reported to have used the Winchester Model 70 in .243 Winchester and .308 Winchester.

The Swedes developed the CG-62 biathlon rifle from their Mausers in 6.5×55. The CG, of course, stands for Carl Gustav which was the primary manufacturer of the Swedish Army’s rifles. Before this rifle they used cut down and modified M96 Mausers. Examples of the CG-62 are shown below with the bottom picture being a variant of the AG-42 Ljungmann turned into a biathlon rifle. You can read more about the history of these Swedish rifles on these threads. 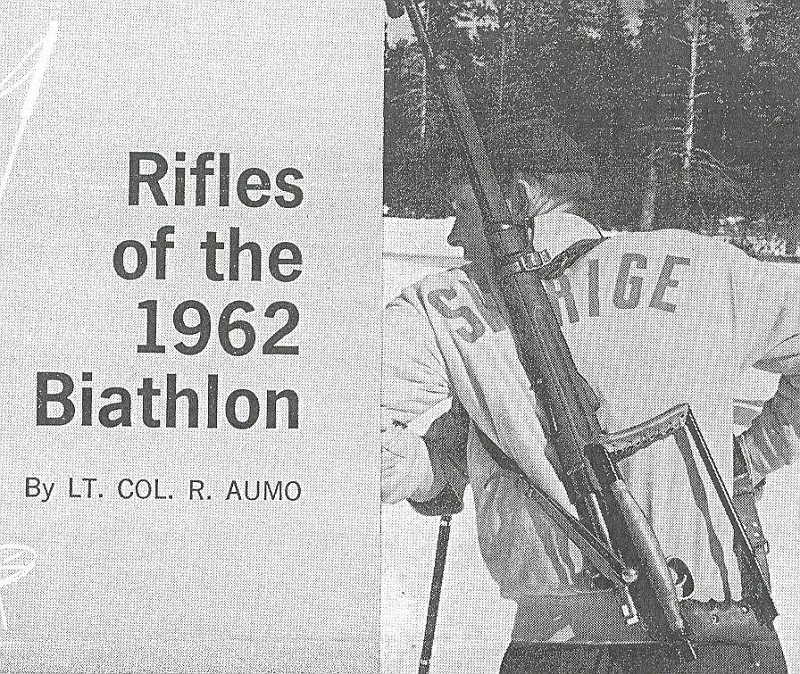 With both Finland and the Soviet Union having tons and tons of Mosin Nagants on hand, it is not surprising that they became the base rifle for their biathlon rifles.

The Finns developed the M-N M28-57 for their biathlon rifle. Chambered in the usual 7.62x54R cartridge, it appears to be a cut down version of the M28-30 with micrometer sights added. The latter rifle was used extensively by the Civil Guards in rifle competitions. The M28-57 can be seen below.

The Finns later adopted a Sako Forester (L579), cut for stripper clips,with a heavy barrel and micrometer sights for biathlon. While I can’t find a picture of this rifle, it is my understanding it was chambered in .243 Winchester.

The Soviets took their adaptation of the Mosin Nagant for biathlon competition even a step further by developing a new round for it. While similar to the Finnish rifle, the Soviet Vostok was chambered in both the usual 7.62x54R and the 6.5x54R. The latter is a necked down version of the 7.62x54R.

Pictures of the rifle and 6.5x54R cartridge can be seen below. 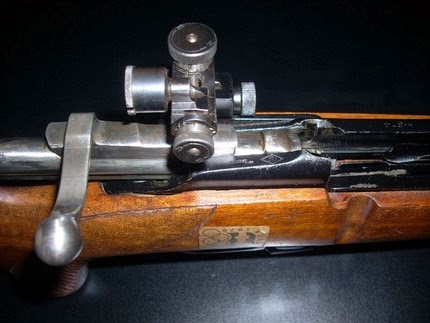 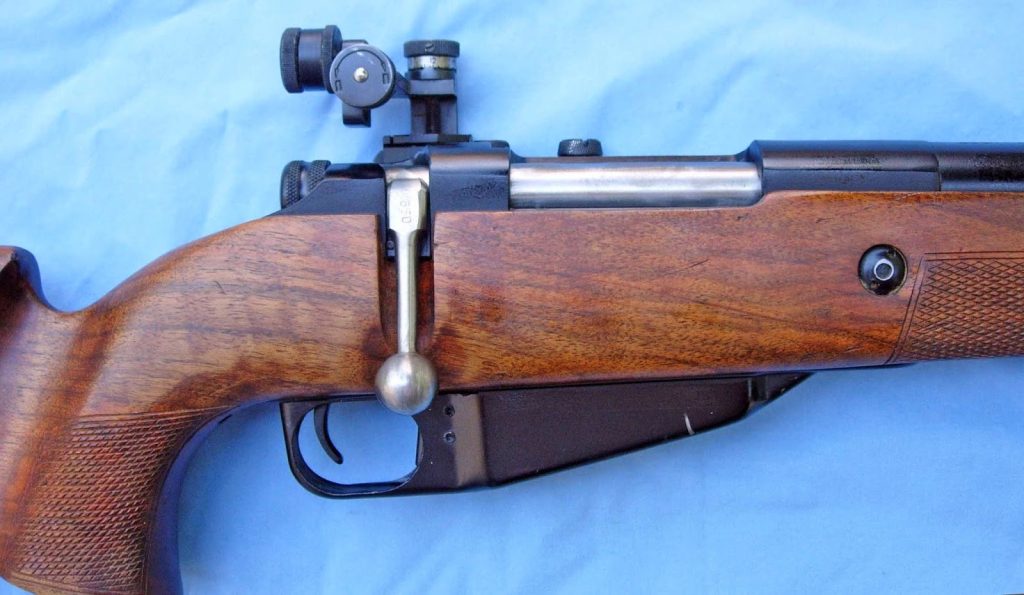 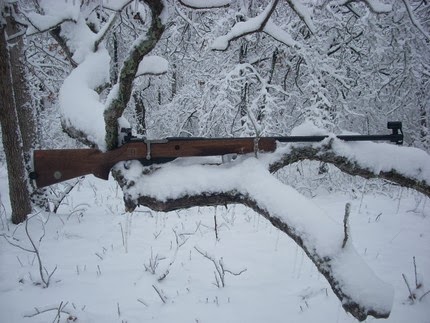 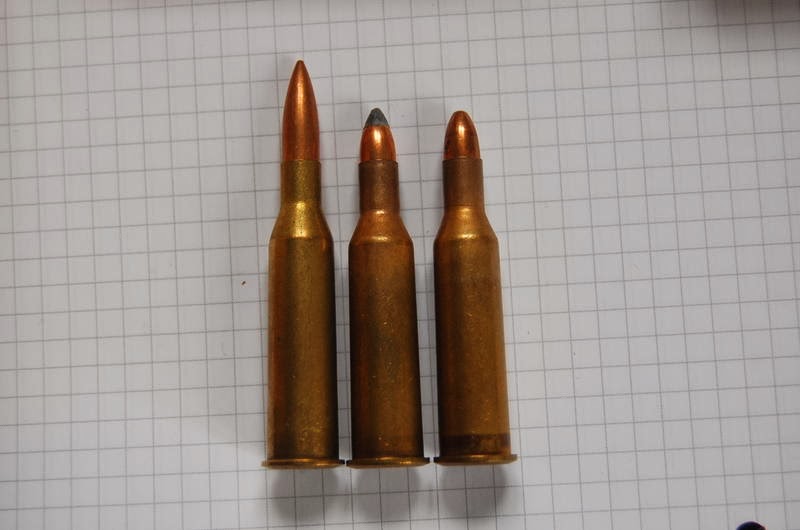 Finally, we have that other Scandinavian biathlon power – Norway. To the best of my knowledge, Norwegian athletes used a modified Mauser M59. The unmodified version can be seen below. These rifles were made by Kongsberg Våpenhistoriske Forening (Kongsberg Small Arms Factory). According to their website, they made a limited number of these just for biathletes. While the M59 was originally chambered in .30-06, later versions were chambered in both 7.62×51 and 6.5×55. It would be my guess that the biathlon team used the 6.5×55 round.

Another view of the rifles used can be seen in this picture from the 1962 Norwegian Biathlon championships. It definitely looks similar to the M59 above. The Digitalt Museum has a whole series of photos from that event here. 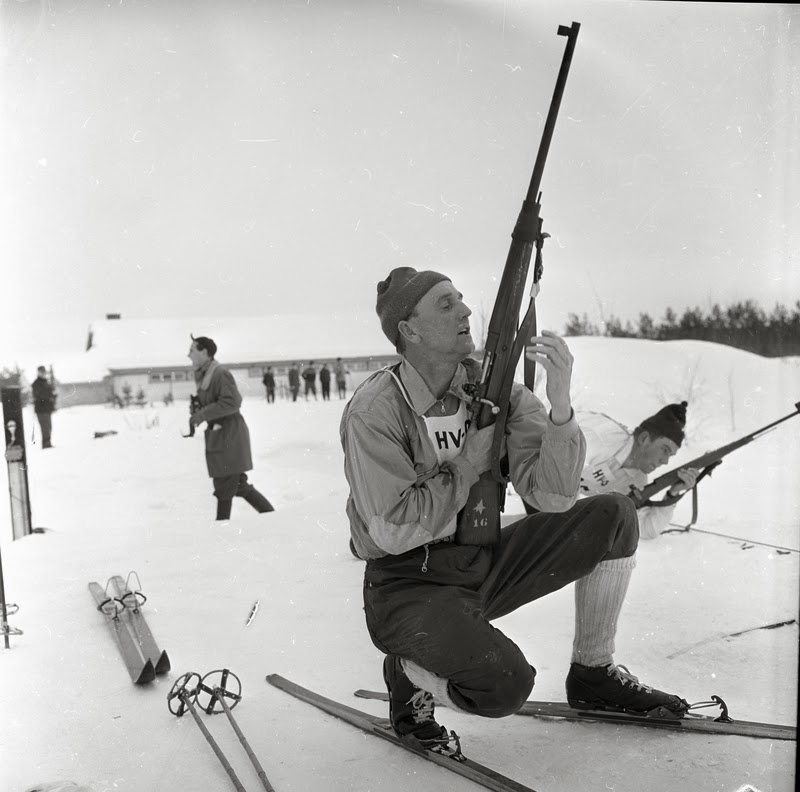 Germany, both East and West, were solid competitors in biathlon. Unfortunately, the only thing I can find is a stamp from the DDR (East German) showing a biathlete shooting. Other than being a bolt action rifle with target sights, who knows. I wouldn’t be surprised if they used the Vostok or Mosin Nagant variant used by the Soviets.

I am sure that there may be other purpose-built center-fire biathlon rifles out there but I think I’ve covered quite a few of them.