wasn’t merely a novel but the playbook for a future American society. They see themselves as the Thought Police out to punish any and all “thoughtcrimes” or deviations from the party line.

Such is the case now in their petition attempting to get the Maryland State Police to revoke the instructor certification of Wicomico County (MD) Sheriff Mike Lewis. His “thoughtcrime” is his outspoken support for the Second Amendment. Sheriff Lewis has stated that he would refuse to let Federal authorities into his county if they wanted “to come in here and strip my citizens of their right to bear arms.”

Inspired by a post by David Codrea on his War On Guns blog saying that all the “right people” were signing the petition, I decided to sign it as well using an appropriate pseudonym. I wanted to choose a name that would express my thoughts about their petition. 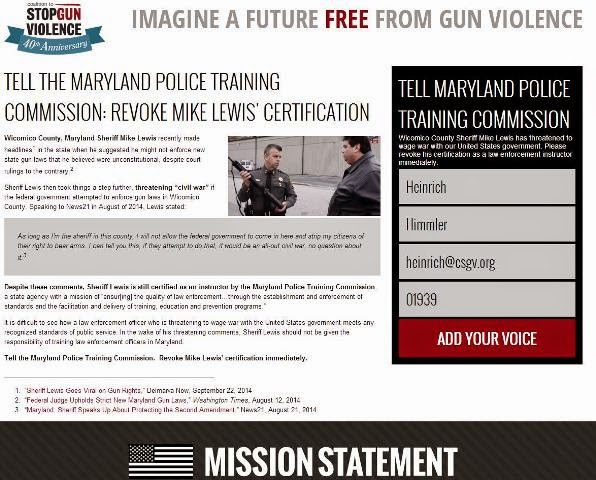 David chose Adolph Hitler. I went with Heinrich Himmler. Most people know that Himmler was the head of the Schutzstaffel (SS). Hitler named Himmler Chief of German Police in 1935 which included the Gestapo, the Criminal Police, the SD, and other police agencies. Given how the Gestapo sought out those who deviated from the National Socialist creed, I think he was an appropriate signatory to CSGV’s petition.

Felix Dzerzhinsky who directed the All-Russia Extraordinary Commission to Combat Counter-revolution and Sabotage or Cheka would have also have been an appropriate pseudonym to use.

If you want to avail CSGV of your personal disgust at their actions, here is the link to their petition. I’m sure you can come up with a good pseudonym to use.

6 thoughts on “It Was CSGV – I Couldn’t Help Myself”