I would think most people would want important decisions left in the hands of elected representatives and not in the hands of faceless bureaucrats. After all, a politician can be turned out of office while the bureaucracy lives on forever.

Not so the Liberal Party in Canada. They are quite upset that Stephen Harper and his Conservative government want to remove the power of the Royal Canadian Mounted Police to make determinations on which firearms should be prohibited. As can be seen in the poster they put up on Facebook, they consider it “unacceptable”. 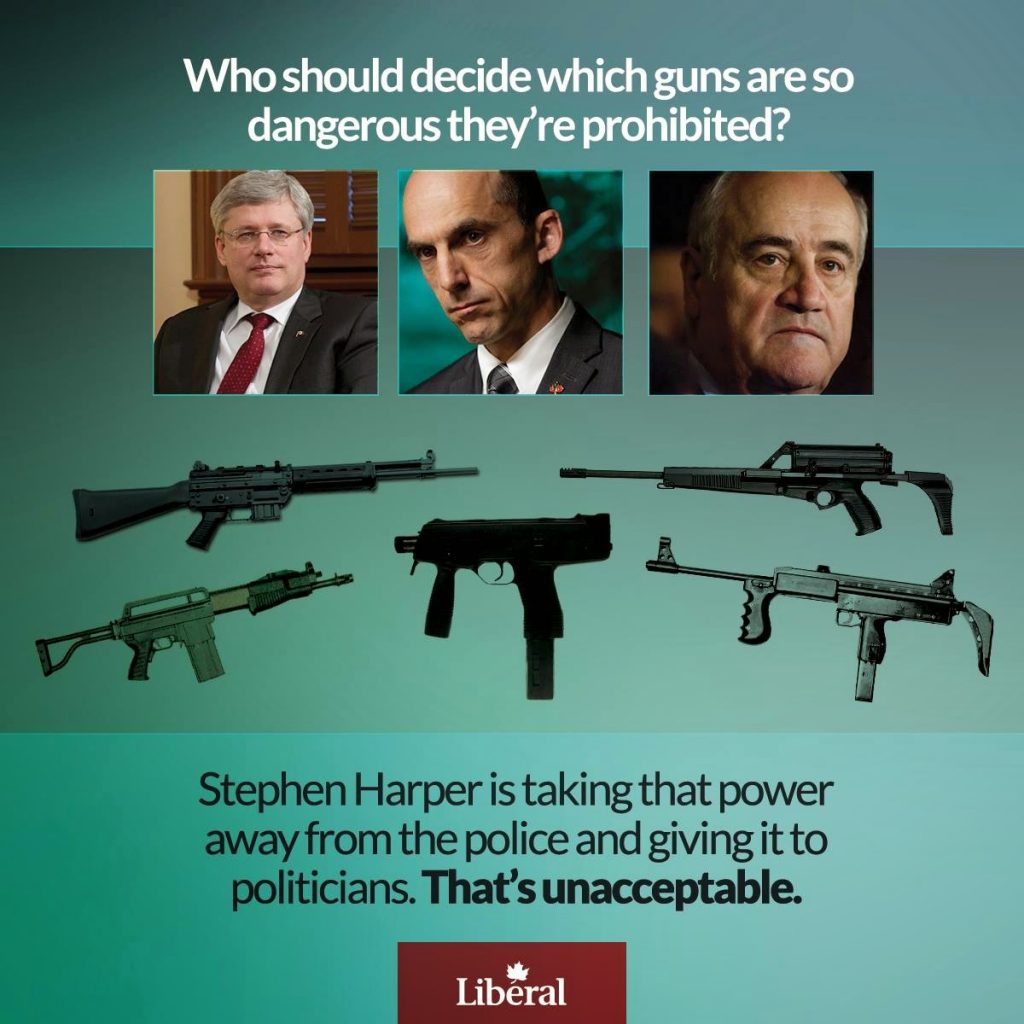 The Liberal Party is the official opposition in the Canadian Parliament and is led by Justin Trudeau. His father, the late Pierre Trudeau, was Prime Minister of Canada from 1968-1979 and from 1980-1984. While serving as Justice Minister, the elder Trudeau introduced Bill C-150 which established a good deal of the gun control in Canada including the non-restricted, restricted, and prohibited categories of firearms.

Their official statement in opposition to Bill C-42 says, in part:

“First, it eliminates the need for owners of prohibited and restricted firearms to have a transportation license to carry those guns in their vehicles. This means they could freely transport handguns or automatic weapons anywhere within their province, whether to a grocery store or a soccer field.

“Secondly, it would take the power to classify firearms out of the hands of the police – the experts in keeping Canadians safe – and put it in the hands of politicians like Stephen Harper. And it would allow those decisions to be made without Parliamentary approval or oversight.

“We think Canadians will agree that this is wrong.

Somehow I doubt Canadian gun owners would consider this wrong.

Bill C-42, the Common Sense Firearms Licensing Act, was introduced in October by Minister for Public Safety Steven Blaney (middle picture in the poster).  The bill had its Second Reading on November 26th.

Here is a quick outline of what Bill C-42 would do from the Canadian Shooting Sports Association.

This bill is, from what I can gather, a start. Neither the Coalition for Gun Control nor the National Firearms Association are altogether happy with Bill C-42. The former opposes the bill because it relaxes some gun control measures. The latter has decided not to endorse the bill because it doesn’t address what they consider the many significant problems with Canada’s firearms regulation. These include decriminalizing firearms possession, addressing regulations that classify firearms by their appearance, and eliminating the punitive safe storage requirements from the criminal code.

Like all bills reforming existing gun controls, it doesn’t go far enough. However, if passed, at least Canada can say it is no longer the New Jersey of the North when it comes to firearms transport.

6 thoughts on “Oh, Canada! Please Keep The Liberals As The Loyal Opposition”