Four years ago Rob Vance and I collaborated on a post showing the progress of concealed carry from 1986 through 2011. The post was anchored by a graphic that showed the growth in shall-issue carry and constitutional carry as a percentage of the United State population. At that time, approximately two-thirds of all Americans lived in a state that allowed either shall-issue or constitutional carry. In other words, shall-issue had become the new normal as it continues to be.

The sea change in the legal status of concealed carry in the United States described below in graphic form follows a still ongoing grass roots effort at the state level, yet with national implications. There is now a fundamental recognition by the American public that giving advantages to criminals over law-abiding citizens, by means of law, is a logical and moral error. This realization has driven the liberalization of state level laws regarding concealed carry since Florida led the way in the modern era beginning in 1987. Twenty-six years later, Illinois became the last state with a de jure ban on concealed carry – passing “shall issue” legislation allowing legalized concealed carry for its citizens as a result of losing Moore v. Madigan and Shepard v. Madigan in the 7th US Circuit Court of Appeals. First permits under the new law were issued in 2014 in that state. The restoration of this fundamental freedom will continue by legislation where we can and by litigation where we cannot.

The two biggest changes shown in the graphic below are the addition of Illinois to the shall-issue column and the growth of constitutional carry from just two small states (Vermont and Alaska) to a total of seven today. 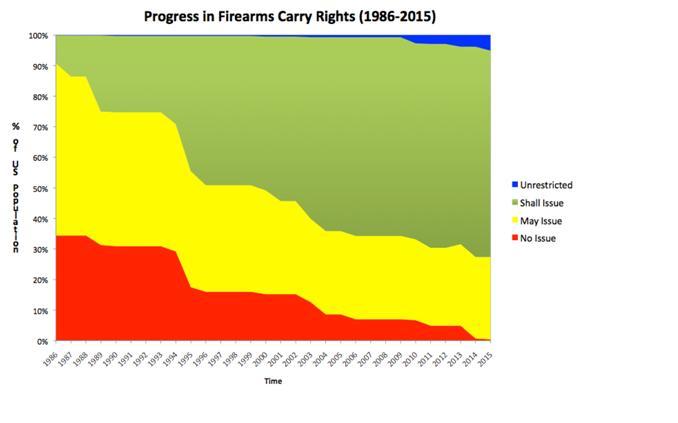 Rob and I are working on an update to Every Picture Tells A Story, Part Two as well as new effort called The Next Wave. This new effort will examine the growth of constitutional carry and its chances in states where it has been introduced but either not passed or vetoed by the governor.

Given that neither Rob nor I believe in hiding our data nor how we put things into categories, you can see it in this appendix.

As of October 15, 2015 here’s the box score in detail state by
state:
Unrestricted Carry States (5.1 %
US population)
Alaska,
Arkansas, Arizona, Kansas, Maine (as of 10/15/15), Vermont, and Wyoming
Shall Issue States (67.5 %
US population)
Alabama,
Colorado, Florida, Georgia, Idaho, Illinois, Indiana, Iowa, Kentucky,
Louisiana, Michigan, Minnesota, Mississippi, Missouri, Montana, Nebraska,
Nevada, New Hampshire, New Mexico, North Carolina, North Dakota, Ohio,
Oklahoma, Oregon, Pennsylvania, South Carolina, South Dakota, Tennessee, Texas,
Utah, Virginia, Washington, West Virginia and Wisconsin
May Issue States (27 %
US population)
California (some counties are
effectively No Issue, and others are much more permissive), Connecticut (*since
2013 I have accounted this as May Issue, as local conditions have changed from
permissive to much less so), Delaware, District of Columbia (obviously not a
state, but treated as one for this analysis), Maryland, Massachusetts, New
Jersey, New York, and Rhode Island
No Issue State (.4 %
US population)
Hawaii (the legal status of Hawaii
is such that while permits are legally available, none are issued, which is why
it is counted as No Issue in this analysis, rather than fitting into the May
Issue category which it’s legislation warrants).
A word or two on definition of terms used in this analysis/graphic:
UNRESTRICTED: no permit is required
to carry a concealed firearm, aka Constitutional Carry
SHALL ISSUE: permit required but
the state is obligated to issue a permit if the applicant meets certain
criteria (age, no felony record, no drug arrests, etc.); i.e., the state has no
discretion.
MAY ISSUE: permit required but
local authorities (e.g. sheriffs’ offices) have discretion in the form of
requirements above and beyond what the state requires.
NO ISSUE: private citizens are
effectively prohibited from carrying firearms for self-defense outside the home
Find the detail data here:
https://docs.google.com/spreadsheets/d/1QxBfs9acTUH8hL1OtkitcivuCzr4IQKjKOQ4_obK61c/pubhtml
See also:
https://en.wikipedia.org/wiki/Constitutional_carry
https://en.wikipedia.org/wiki/Concealed_carry_in_the_United_States
http://legallyarmed.com/ccw_statistics.htm
Thanks also to Jeff Dege at
http://www.gun-nuttery.com.

11 thoughts on “Every Picture Tells A Story, Part Three”