Verrit.com is a new website founded by Peter Daou. They call themselves the media for the 65.8 million. That is a play on the popular vote received by Hillary Clinton in the 2016 Presidential Election. Daou was an advisor to Clinton in her 2008 run for the presidency.

The website claims to have verified all the political nuggets that they put into little digestible bites. They even put a verification number of that little nugget of wisdom.

Verrit collects and contextualizes noteworthy facts, stats, and quotes for politically engaged citizens. Each “verrit” is a verified item of information marked with a 7-digit identification code. To authenticate a verrit, enter the code in the search bar and match it to our database.

The website and its “service” has been endorsed by Clinton. That said, it is getting grief from both the left and the right. Politico says it looks like “North Korean Agitprop.” The Washington Examiner calls it, in an opinion piece, “a leftist partisan blunder.” Finally, even the Washington Post – Pravda on the Potomac – calls it a media platform that “is looking worse and worse.”

Let’s look at one of their cards dealing with “gun violence” (sic). 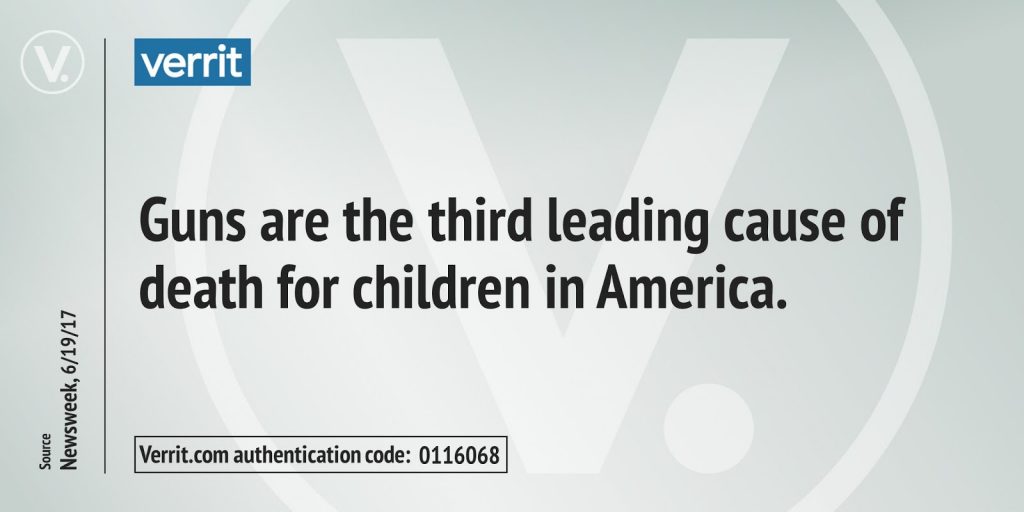 You know that old saying about how figures lie and liars figure? This is one of them.

First, who in their right mind would use Newsweek as your source for anything authoritative? Really?

Second, it also depends on how you define children. To see what the real numbers showed, I went to the authoritative source on mortality statistics in the United States:  the Center for Disease Control and their WISQARS database.

The database has a tool where you can generate charts showing deaths by age and by cause. I broke down the age groups into less than one, 1-4, 5-9, 10-14, and 15-19. While it generated numbers for all age groups I don’t consider anyone over 19 to be a “child”. If I could have specified less than 18 only, I would have done that as 18 is the age of majority in virtually all the states.

Here are the top five leading causes of death for those under the age of 20 in the United States in 2015:

So obviously, Newsweek and Verrit.com are wrong. Guns are NOT the third leading cause of death for children in America. To give you a better idea about firearm related deaths, I broke it down by age, type of death, and whether it involved a firearm in the chart below. All the data comes directly from the CDC database mentioned above. I would encourage everyone to run their own chart as they allow you to drill down.

I have underlined the deaths involving a firearm. All of these numbers are from 2015 which are the latest available.

What struck me about these numbers is that below the age of 15, the number of homicides and suicides involving a firearm are rather low. However, it is the cohort between the ages of 15 and 19 that are of concern. Without having the ICD-10 data that would allow me to drill down even further, I can only surmise what is behind the number of homicides in the later teen years. I would speculate that much of it is drug and gang related but I can’t say that for sure.

The bottom line here is that those opposed to the Second Amendment will fudge their numbers and that Verrit can put out as much “fake news” as anyone else even if it has a gimmicky verification number. If you want reliable data, you have to go to reliable sources. Even then, you have to dig to get it.

3 thoughts on “Verrit.Com Isn’t Reliable No Matter What They Or Hillary Says”