I received a text this afternoon from the Brady Campaign regarding the mass casualty event in Las Vegas. They are urging people to contact Congress and ask for more gun control. You can see the screenshot of it below. 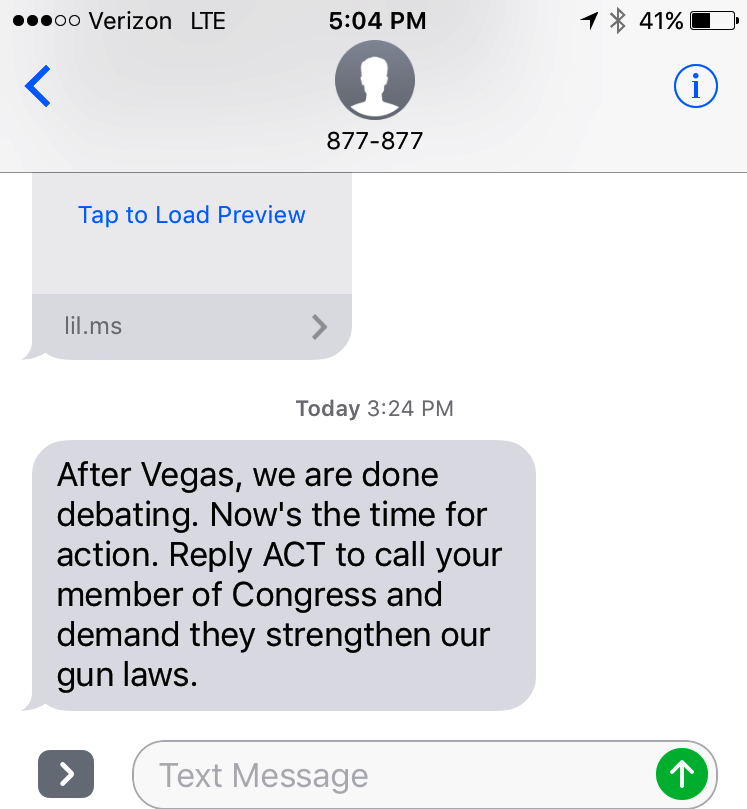 Let’s look at what we know and what we don’t know.

Do we know the name, age, and race of the murderer?

Yes. However, I make it a policy of this blog never to grant mass murderers the pleasure of having their name become infamous. He was a white male aged 64.

Do we know the number of victims?

Yes. According to the Las Vegas Review-Journal, the latest count is 58 killed and at least 515 wounded.

Do we know why the murderer did this?

No. As far as it has been reported, there has been no manifesto, no suicide note, and no indications as to why the murderer decided to commit this evil act.

Is it terrorism related?

While ISIS has claimed responsibility for this calling it a lone wolf attack by someone who had recently converted to Islam, the FBI has discounted this. However, as Andrew McCarthy at the National Review noted, the murderer did terrorize the community.

Do we know what type of firearm or firearms he used?

How many firearms did he have?

Did he have fully automatic rifles?

The best answer is maybe. He may have had a full-auto rifle or he may have had a bumpstock or GAT crank. There is debate on this and no one has reported conclusively on this issue. He was reported to have been a multi-millionaire with multiple homes and two airplanes. He could have afforded to buy legal NFA machine guns but we don’t know.

Do we know how the murderer obtained his firearms?

No. Update: ABC News reported on their evening news that at least some of the firearms were purchased from a gun store in Mesquite, NV after the requisite NICS check. They are not a Class 3 dealer.

Do we know how the murderer died?

Yes. He committed suicide as the police were breaching the door to his room.

Did the murderer have a criminal record?

No. His late father, however, was a convicted bank robber and had been on the FBI’s Most Wanted List. The father had escaped from Federal prison and did try to run down FBI agents with a car. He died in 1998.

What firearms law would have prevented this?

Put bluntly, none. The killer had a clean record and had no reported history of mental illness. He would have passed even the strictest of background checks including those required to purchase NFA items. Moreover, given his financial resources, he could have obtained any sort of weapon on the black market. A determined lone wolf with his resources will always be able to cause death and destruction. In this case it seems the killer put a good deal of planning and money into getting the right location at the right time.

Policy made in haste rarely is good policy. We should resist any and all efforts to use this tragedy as the basis for new gun control laws. The Rahm Emanuel “never let a tragedy go to waste” days should be over and they should stay over.

Ben Shapiro at the Daily Wire puts it very well in this post from earlier in the day.