The 3rd Infantry Regiment or The Old Guard is the oldest active duty infantry regiment in the US Army. They are charged with providing the casket teams at Arlington National Cemetery. The soldiers in these teams perform this duty with solemnity and reverence for the fallen. My best friend’s son John served as a platoon leader with the 4th Battalion, 3rd Infantry Regiment after his service in Afghanistan.

On this Memorial Day, I’d also like to remember my father. He is not buried in Arlington but is buried next to his parents and siblings in North Carolina. He served in WWII in the Caribbean, served in Germany as part of the Army of Occupation during the 1950s, served in Korea post-Korean war, and finally served in South Vietnam for two tours of duty. He was medically retired in 1972 and passed away nine years later in 1981. He was 62 and 10 days old when he died in his sleep. This year I passed a milestone as I have now outlived my dad. 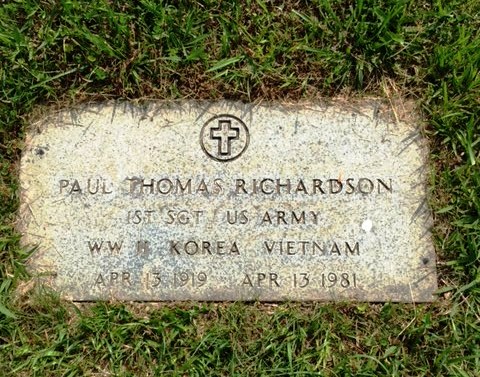 The footstone provided by the military makes it seem like he died on his birthday. His actual birthday was April 3rd and not the 13th. I think my mother made the decision not to force them to correct it.