More NRA Board of Directors are announcing that they’ve received notification of being removed from their prior committees. The latest is Duane Liptak. In addition to being a board member, he is the Executive VP of Magpul Industries as well as a veteran of the US Marine Corps where he served as both an infantryman and as a F/A-18 pilot.

I’ve been out of the office, but I’m back now. Last year, I was chairman of the education and training committee, I was on military and veterans affairs, and I was on sport shooting and action shooting. I’ve repeatedly requested finance and legislative policy since I started my involvement with the NRA, and I have attended those meetings whenever I could. I guess I’ll have less schedule conflicts to worry about when attending other meetings since I’ve been stripped of all my formal committee assignments except action shooting. I guess at least Julie A. Golob still likes me. 😁 Despite a lot of effort on my part to promote the importance of the organization and remind folks of the capabilities of the NRA that we must preserve as we move forward, I have landed on the “naughty list”. This needs to get sorted out, now.

Duane is correct about his role in promoting the importance of the NRA. A quick Google search shows open letters from him as well as an op-ed stressing the role of the NRA in promoting and preserving gun rights.

You can see his committee assignment below. 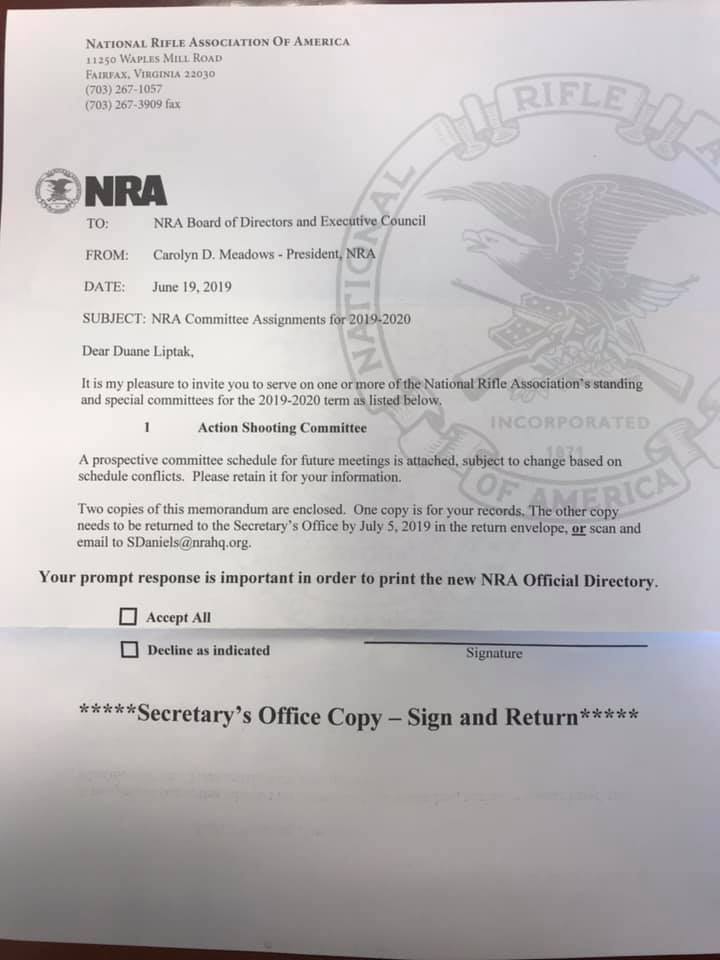 I guess since Duane is assigned to at least one committee, he is only on the slightly naughty list unlike Tim, Allen, and Esther who are on the really naughty list. I’m not sure what he said to run afoul of Wayne and his toadies but he must have said something.

UPDATE: It was confirmed to me today that Tiffany Johnson was removed from the Outreach Committee. Given she is an attorney, a trainer with Rangemaster, a woman, and not the least a person of color, removing her from that committee in retribution for her open letter to the Board of Directors was both stupid and vindictive. As she says in her blog post about her service on the committee, her suggestions and comments were well received until “the letter”.  Just when the NRA needs to be broadening its base and have the ideal person to help in Tiffany, they do something like this. Stupid, stupid, stupid!