Another day and another NRA Board member reports that he has been removed from all his committees. In this case, it is Sean Maloney of Ohio. He, along with Tim Knight, are two of the stalwarts of the grass roots in the NRA. When the recall campaign began in Colorado a few years ago, both he and Tim answered the call and went to Colorado to help in the successful effort.

You may also recall that when CarryGuard was introduced, a number of companies that offered legal protection services for concealed carriers were summarily disinvited to the NRA Annual Meeting and Expo in Atlanta. Sean Maloney’s Second Call Defense was one of those organizations.

Below is the form letter that Sean received from NRA President Carolyn Meadows. 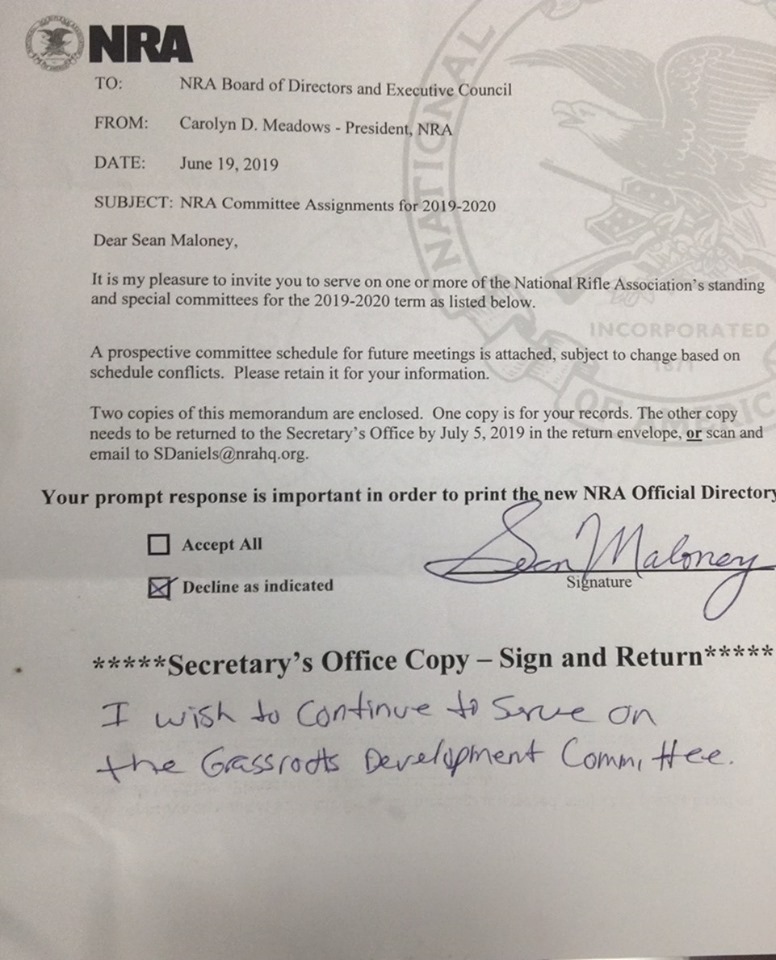 Sean responded to Mrs. Meadows with this letter:


I recently received notification from you, that you removed me from all my NRA Board of Directors Committee Assignments, with no explanation. Even after repeated phone calls to you, which resulted in voicemails asking for a return call, I still have not received a return phone call, letter or email of explanation.


Shockingly, you even removed me from the NRA-ILA Grassroots Development Committee, after many years of serving on that committee with perfect attendance. After years of volunteer grassroots activism, I was recognized in 2010 with the NRA-ILA Jay M. Littlefield Volunteer of the Year Award and recognized on the floor of the Ohio House of Representatives for my work as an Election Volunteer Coordinator for NRA-ILA in Ohio.


Over the years, as a Volunteer for the NRA, paying my own way for travel expenses, and receiving no compensation from the NRA, I have continued to dedicate myself to grassroots activism.


In 2013, I traveled to Colorado to participate in the successful recall election effort of two anti-gun Senators. Again, in 2013, I traveled to Virginia under the direction of NRA-ILA Grassroots Division to campaign on behalf of pro-gun Gubernatorial, Senate of Virginia and Virginia House of Delegates Candidates.


In 2014, I traveled to Connecticut, Iowa and Ohio, under the direction of NRA-ILA Grassroots Division and campaigned on behalf of Federal State and Local pro-gun candidates during Primary and General Elections.


In 2015, I traveled to Virginia under the direction of NRA-ILA Grassroots Division to campaign on behalf of Senate of Virginia and Virginia House of Delegates pro-gun Candidates.


In 2016, I traveled to Florida to assist in the General Election; that same election cycle I returned to Ohio where I volunteered for the top NRA-ILA Campaign Field Office in the Country, in support of Donald Trump, and other Federal, State and Local candidates.


In 2018, I campaigned in Ohio under the direction of NRA-ILA Grassroots Division on behalf of Federal, State, and Local candidates. I also hosted a pro-gun meet and greet Ohio Candidate Forum for all Federal, State, and Local pro-gun candidates up for election in Ohio. In Ohio, under the direction of the NRA-ILA, I assisted in successfully electing a 100% pro-gun Executive Slate.


Earlier this year, in May, I co-hosted a shooting event for my pro-gun Congressman Warren Davidson. Most recently, I traveled to Sandusky County, Ohio, and spoke to a “100 NRA Club” considering ending its affiliation with the NRA, because of recent concerns. I successfully persuaded them to remain an NRA Club.


Yet, after all I have done in support of the Grassroots Development Committee, and all the other NRA Committees of which I faithfully served, I was blacklisted. I can only surmise, that I was blacklisted for taking actions to obey my oath as an NRA Board Member, and follow the Code of Ethics for Directors of Nonprofit Corporations; which required me to exercise my fiduciary duty of care; which caused me to question management decisions within the NRA, and to further investigate matters of which I was made aware.

Sean is only the latest Board member to acknowledge his removal from committees. There will be more to come. Of that you can be sure.

One thought on “The Purges Continue, Part III”