When I was a kid, Army-Navy stores were common and they were filled with surplus items from WWII and Korea. Since it was before the Gun Control Act of 1968 you even found racks of old Mausers and Springfields full of cosmoline. If you wanted to play Army (how un-PC is that!), they had all the stuff you needed.

Today it is rare to find a real military surplus stores that has actual surplus items and not crap made in China. Usually the closest they come to surplus is selling ribbons, medals, and insignia for wannabe SEALS and other “SpecOps Operators.”

I am fortunate that I have a real military surplus store little more than 5 miles from my house. The Old Grouch’s Military Surplus sells the real thing whether it is surplus USMC motorcycles, wooden practice shells for a 3″ naval gun, or an Alice pack. You keep going back because you just never know what they will somehow lay their hands on. They are located in beautiful downtown Clyde, NC, population 1,324. The store is right across from an old naval gun that is the town’s war memorial as you can see in the picture below. 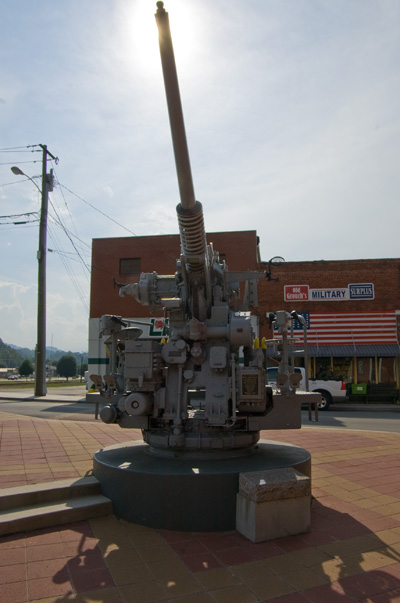 Thanks to the second generation in the business, the Old Grouch’s son Tim, they now have both a blog and an online presence. They even have a Facebook page! If you are some of the more unusual surplus items along with the common stuff, I suggest giving them a try. If you are ever visiting western North Carolina, drop in to see what a real military surplus store looks like.

Jack Spirko of The Survival Podcast just put out a video review of surplus Italian Army alpine rucksacks sold by Old Grouch’s. I have one of the bunch that they sold earlier minus the assault pack. I concur with Jack that they are well made.