The two men running for Mayor of Jacksonville, Florida agree on one thing. They don’t want any part of Mayor Bloomberg’s Illegal Mayors unlike the outgoing mayor, John Peyton, who is a member.

According to a story in the Florida Times-Union, agreeing on non-participation in MAIG is about the only thing that Democrat Alvin Brown and Republican Mike Hogan do agree on.

Mike Hogan, the Republican, is currently the Tax Collector for Duval County and was formerly a Florida State Representative. Hogan, pictured below with his wife Judy, had this to say on his website about Mayors Against Illegal Guns and the Second Amendment.

Mike Hogan is the only candidate in this race with a proven record of fighting on behalf of Florida’s gun owners. He fought against legislation that would have virtually halted our gun shows and voted for legislation that prohibits state and local governments from suing gun manufacturers. Mike has an A Rating from the NRA.

As Jacksonville’s next mayor, Mike Hogan will continue to fight for the Second Amendment, beginning with an end to the City of Jacksonville’s affiliation with Mayors Against Illegal Guns, a deceptively-named national organization that often puts gun control over crime prevention.

Alvin Brown, the Democrat, is currently Executive in Residence at Jacksonville University’s College of Business and is a former advisor to President Bill Clinton, VP Al Gore, and NY Gov. Andrew Cuomo when Cuomo was Secretary of HUD. He calls himself a conservative Democrat. Brown, pictured below, at a press conference on his position opposing membership in MAIG as reported by the Florida Times-Union. 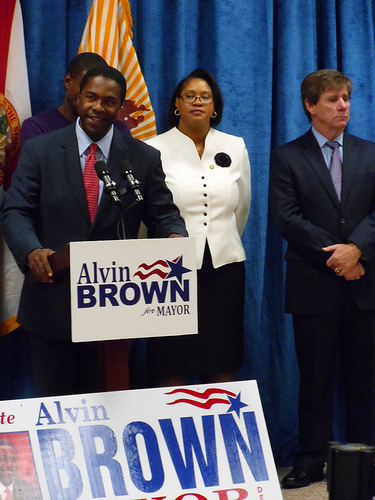 Brown, asked about (Hogan’s) website reference , said he believed that anything accomplished by the program could be handled locally and saw no need to spend resources to continue in the program.

Brown said he’ll first focus on keeping youths from having the need to seek out a gun that can only be purchased illegally.

“I would focus,” he said, “on making sure we prevent young people from becoming ex-felons in the first place.“

While Brown’s statements above are not as strong on the Second Amendment as those of Hogan, they both agree that participation in Bloomberg’s Mayors Against Illegal Guns is not in the future for Jacksonville, Florida.

One thought on “They Agree On One Thing”