Michael Bane devoted a good part of his weekly Down Range Radio podcast to Project Gunwalker. Given that Michael is the master of the rant, it was entertaining as well as thought-provoking. You can listen to it by going to the link above or downloading it on iTunes.

He has two threads of speculation about Project Gunwalker and those involved in running it. As he calls it, “just wild and crazy speculation”. Nonetheless, it makes good sense.

First, that Operation Fast and Furious is only one of the programs with “Jolly Pirate names” that allowed weapons to be smuggled into Mexico. We only know of this one because of the brave whistle-blowers who were sickened that fellow U.S. law enforcement officers were killed with the “walked” guns.

Second, in his experience Bane notes, that BATFE loves their gadgets. This is especially true of gadgets that supposedly will help them in their law enforcement functions. The gun dealers who worked with BATFE on Operation Fast and Furious (despite their grave reservations on selling AK-47s to what they knew in their gut were straw purchasers) were selling 10, 20, and even 40 AKs at a time. This leads to the question – why didn’t BATFE chip the guns with mini GPS trackers? It would have been very easy to chip these guns and then call the purchasers saying your guns have arrived. 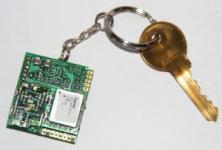 The chip shown above was from 2008 and sold publicly. Imagine how much smaller one of these devices sold into the restricted Federal law enforcement market would probably be.

Expanding on the mini GPS trackers, one must wonder why the cars and trucks of the known straw purchasers and smugglers weren’t tagged with auto-sized GPS trackers. It might have enabled BATFE to actually follow the guns into the Mexico and not lose them.

As Michael notes, this is all speculation. Maybe we have all watched too many cop shows on TV and expect all law enforcement to use those gee-whiz gadgets even when they don’t. Still, you have to wonder.

4 thoughts on “Speculations On Operation Fast And Furious”