The Asheville area of Western North Carolina is a retirement mecca, a haven for hippies and other counter culture sorts, and a vacation destination for the Obamas.The Chamber of Commerce ran an ad campaign for years called Asheville: Altitude Affects Attitude.

The car of choice in Asheville for both hippies and registered nurses seems to be either the Subaru Outback Wagon or the Subaru Forester. It is often joked that there is a requirement to have at least one of the family cars be a Subaru if you live in Asheville

Bumpersticks are big in Asheville. One of the more popular bumpersticks in town is “Asheville Where Weird Is Normal”. Vying for popularity is “Coexist” where the letters are religious symbols for the major religions as seen below on a Subaru Forester. 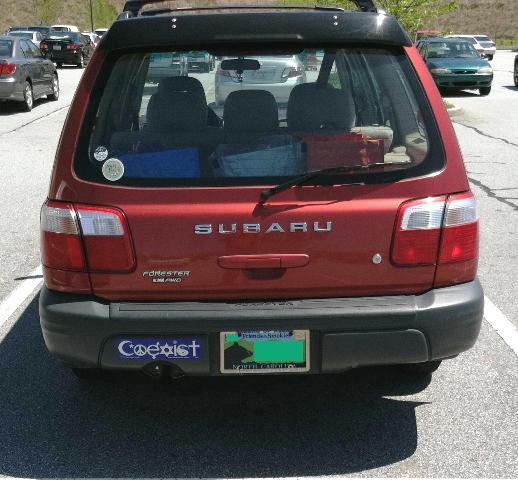 About a year ago, SayUncle had a post about how Coexist bugged him. He linked to an alternative Coexist for gunnies composed of gun manufacturer’s logos.

I thought it was cool and showed it to the Complementary Spouse. Now she is a crafty one and can make something out of nothing in a heartbeat. So she took the picture, blew it up, printed it out on a color laser printer, and then laminated it. Instant bumpersticker! And given the politics of Asheville, a counter-revolutionary one at that. 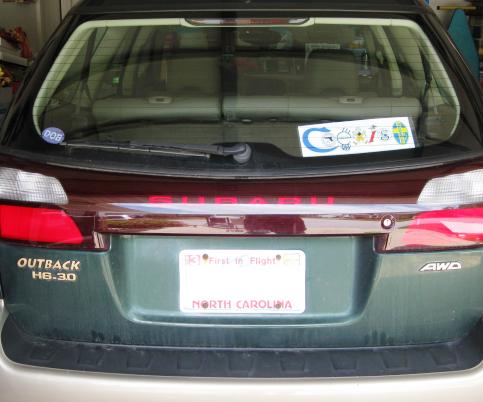 We love tweaking the noses of the liberals and gun banners. The best thing about it – they don’t even realize it most of the time. She has explained the symbols to her more conservative co-workers who have to be somewhat closeted about their politics and they just smile.