The ATF’s proposal to expand reporting of multiple firearm sales to include semi-automatic rifles in calibers greater than .22, while limited to the Southwest border states, is and was a major gun control measure. As such, you would expect gun control groups to submit long proposals in support of the measure. The Brady Campaign even announced their submission with a press release.

Ladd Everitt is the Director of Communications for the Coalition to Stop Gun Violence and the Educational Fund to Stop Gun Violence. He has held this position for five years so it can be assumed that he understands how the game is played.  When ATF is proposing a new gun control regulation, it can be presumed that all gun control groups will submit comments supporting it.

So much for assumptions and presumptions. The picture below is a screen shot from the ATF’s “Comments Regarding Information Collection, Reports of Multiple Sales of Certain Rifles, Published December 17, 2010”. It represents the comments submitted by Mr. Everitt. 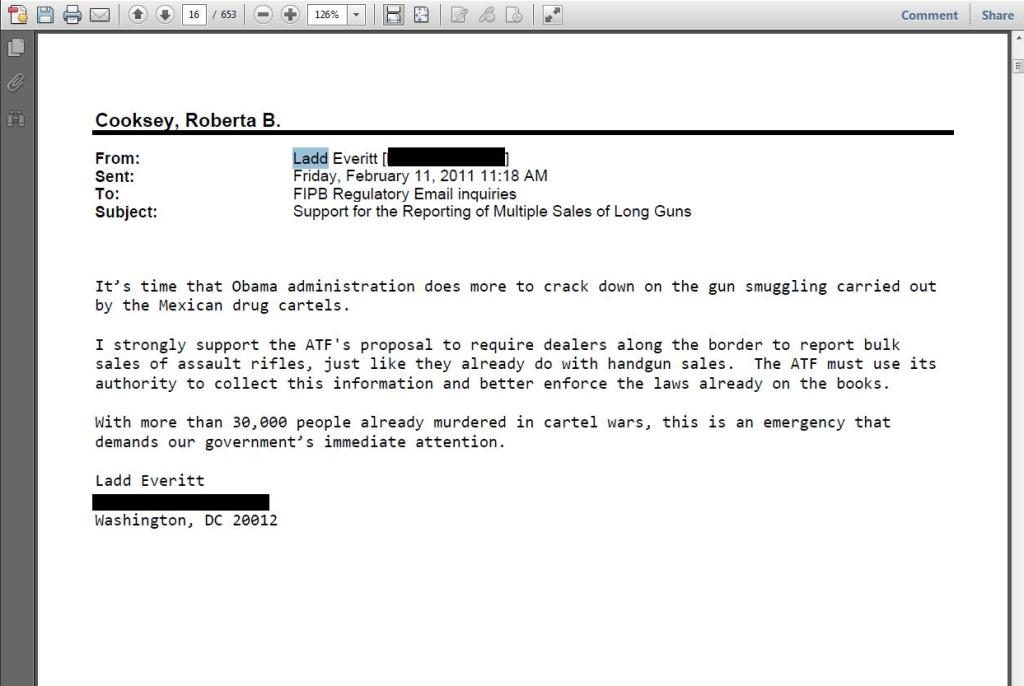 That’s right, Mr. Everitt just put his name and address into the form letter generator sponsored by Mayor Bloomberg and his Illegal Mayors. He didn’t bother to even write a comment for CSGV even though so-called assault weapons are one of the items they oppose. How lame is that?

You will notice that I have blacked out Mr. Everitt’s address and email. Unlike Mr. Everitt, I don’t get off on publishing personal data of those with whom I disagree.

I have wondered how a Director of Communications for an organization in D.C. has the time to engage in flame wars on Twitter, character assassination on Facebook, and other childish games involving those opposed to his gun prohibitionist ideals. Now I know.

One thought on “How Lame Can You Get”